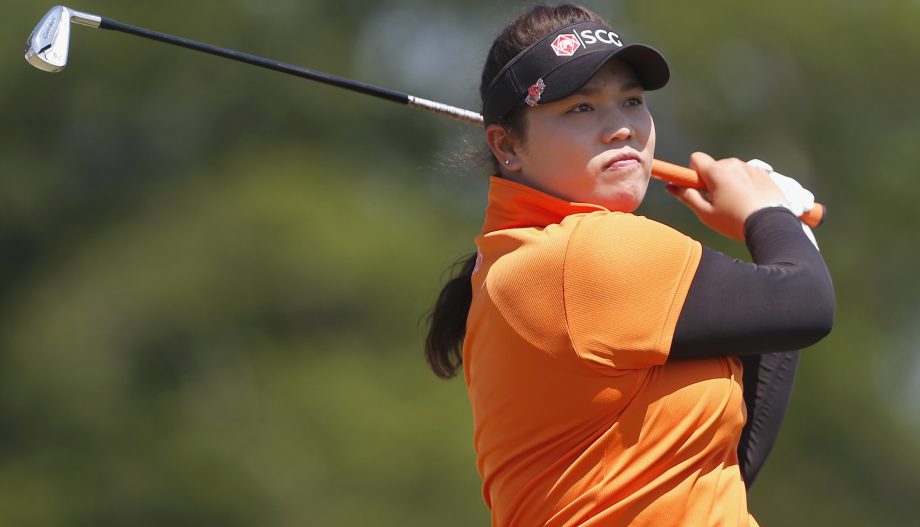 PRATTVILLE, Ala. – Ariya Jutanugarn knows the pain of losing a final-round lead, so she’s sticking with the theme of “having fun” this time.

Jutanugarn certainly had some good times when she birdied eight of the final nine holes Saturday to match the Yokohama Tire LPGA Classic record at 9-under 63 and take a three-stroke lead.

Seeking her first LPGA Tour victory, the 20-year-old Thai player had a 14-under 202 total. She showed little emotion at the end, giving a small wave toward the bleachers after picking up her ball and strolling toward her playing partners for a hug.

“(Sunday’s) going to be so much fun,” Jutanugarn said. “I just want to enjoy and have fun.”

Ryann O’Toole and Australia’s Minjee Lee were tied for second. They each shot 68 on a day when the winds calmed down after the first two rounds.

Jutanugarn parred No. 15, the only blemish in her back-nine birdie run on the links-style Senator Course at Capitol Hill. She pulled her approach left on No. 17 and still knocked it within a couple of feet of the hole, and closed with a 5-footer on the final hole for yet another birdie.

She has flirted with wins before but had two final-round collapses. Last month in the ANA Inspiration, she had a two-stroke lead with three holes left and closed with three bogeys to finish fourth _ two strokes behind winner Lydia Ko in the major championship. In the 2013 LPGA Thailand at age 17, Jutanugarn blew a two-stroke lead with a closing triple bogey in a one-stroke loss to Inbee Park.

Asked about the close calls, Jutanugarn stuck to the “fun” theme.

“Final round, so (I) just want to have fun and enjoy and good shots tomorrow,” she said.

She’s the eighth player to shoot 63 in the tournament, which was moved up from its normal late summer slot because of the Olympics.

“As far as she hits it, on this golf course, she should shoot that number,” Stacy Lewis said.

Second-round leader So Yeon Ryu was four strokes back after a 71, making two birdies and a bogey.

Alena Sharp is the top Canadian after shooting a 71 on Saturday. The Hamilton native is tied for 20th at 5 under. Brooke Henderson, of Smiths Falls, Ont., shot a 68 to move into a tie for 30th while Samantha Richdale, of Kelowna, B.C., is 1 under for the tournament.

Lewis, the 2012 winner, didn’t have a bogey until the final hole Saturday for her second straight 68. She and Morgan Pressel, who shot a 70, were 9 under.

“I just got on the wrong side of the holes,” Lewis said. “I had a lot of tough putts, a lot of downhill sliders and just played a lot better than the score, which I guess is a good thing going into the final round.

“I know a low score is still out there.”

Brittany Altomare was among six players at 8 under after a 66. She birdied seven of the first 11 holes, then had two straight bogeys before regrouping.

Altomare got her first victory as a professional two weeks ago in the Symetra Tour’s Guardian Retirement Championship, beating Nicole Broch Larsen with a birdie on the fifth hole of a playoff.

Altomare expects to be eligible the rest of the year for LPGA Tour events after gaining status on the money-list reshuffle.

Possibly being in LPGA Tour contention going into the final day is another new experience for the 25-year-old, though Jutanugarn’s scorching finish made that less likely. Asked about her approach for Sunday, Altomare laughed and gave a shrug.

“I don’t really know, actually,” she said. “I’ve never really been in this position on the LPGA. It’s just the same, I think. Just go out there and just be aggressive and hopefully it’s your day.