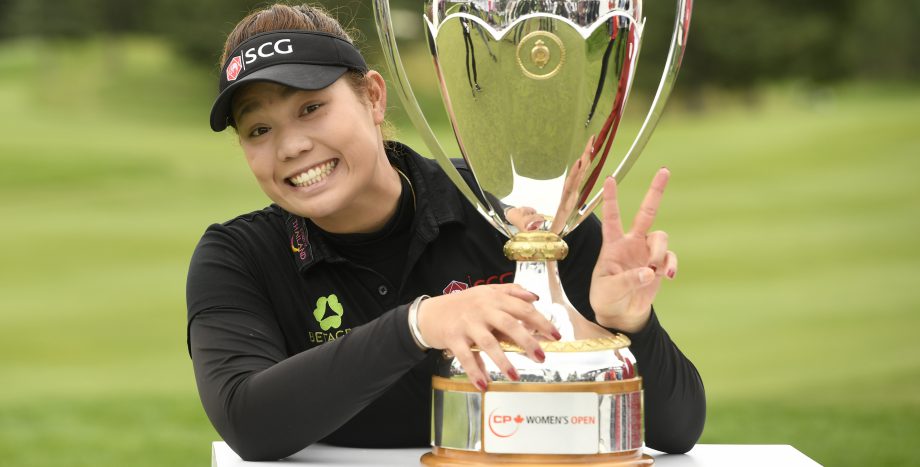 CALGARY – Ariya Jutanugarn ran away with the CP Women’s Open at chilly Priddis Greens for her LPGA Tour-leading fifth victory of the year – all in the last 10 events.

Nine days after withdrawing from the Rio Olympics because of a left knee injury, the 20-year-old Thai player made a 12-foot birdie putt on the final hole for a 6-under 66 and a four-stroke victory.

Bundled up in a winter jacket between shots with the temperature in the lows 50s on the overcast afternoon, the second-ranked Jutanugarn matched the tournament record for relation to par 23-under, set by So Yeon Ryu two years ago at London Hunt Club in Ontario.

After a late meltdown cost Jutanugarn her first LPGA Tour victory in April in the major ANA Inspiration, she broke through in May with three straight victories. She won the Women’s British Open in the event before the Olympics, and made it two-in-a-row on the tour Sunday in the foothills of the Canadian Rockies – blasting 2-irons and 3-woods off the driving holes on the tree-lined course.

South Korea’s Sei Young Kim, a two-time winner this year, was second after a 65.

Canada’s Alena Sharp had the best result of her LPGA Tour career, birdieing the final two holes for a 67 to finish fourth at 16 under. Three-time champion Ko had a 69 to tie for seventh at 13 under.

Canadian star Brooke Henderson shot a 69 to tie for 14th at 11 under. The 18-year-old Henderson beat Ko in a playoff in June in the KPMG Women’s PGA Championship for her first major title, and successfully defended her Cambia Portland Classic title last month. She will play in her home province next week in the Manulife LPGA Classic in Cambridge, Ontario.