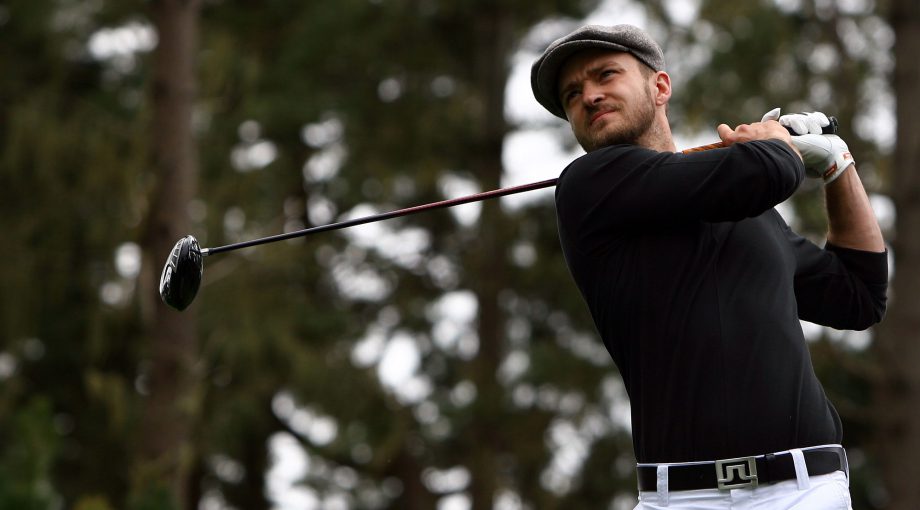 This article was originally published in October of 2016

37-year-old Justin Randall Timberlake – better known as Justin Timberlake or simply JT – is a pop icon and a man of many talents.

Since breaking through as a teenager with the popular boy band NSYNC in the late 1990s the Memphis, Tennessee native has gone on to find massive success as a solo artist earning nine Grammy Awards – and counting.

The former Mickey Mouse Club cast member has also enjoyed success on the big screen with parts in popular movies such as Alpha Dog, The Social Network, and Shrek the Third.

Timberlake’s latest project sees him as the voice of Branch in the upcoming animated musical comedy, Trolls, which co-stars Anna Kendrick.

Besides his accomplishments as a chart-topping artist and a respected actor, Timberlake is also a talented golfer – who started playing at the age of 12 and shoots a six handicap.

“It’s pretty impressive for someone like JT, who’s constantly on the go, to be a single digit handicap,” acknowledged former Canadian national team member, Rebecca Lee-Bentham, who also started playing golf at the age of 12.

“He seems like a man of many talents, but it also takes a lot of hard work to be where he’s at,” she added about Timberlake who co-produced the 2013 documentary, The Short Game, about a group of young elite golfers preparing for the 2012 U.S. Kids Golf World Championship.

Just last month, the pop icon was in Toronto for the premier of Justin Timberlake and The Tennessee Kids – a concert documentary from his 20/20 Experience tour.

The 90 minute feature by Academy Award winning director Jonathan Demme premiered during the Toronto International Film Festival and was met with much excitement and buzz especially given that it meant Timberlake would be walking the red carpet at Roy Thomson Hall.

The “Can’t Stop the Feeling!” singer was caught up in the TIFF buzz also.  After meeting up with Demme on the red carpet and sharing a hug, Timberlake declared: “We made it!”

Then with his cell phone in his hand, he proceeded to run up and down the red carpet capturing the excitement of his screaming fans – many of whom had been camping out for hours in anticipation of his arrival.

“I always love meeting people who have achieved a lot in their careers, and who have given back a lot to their community and JT has done so much in every aspect of his life,” said Lee-Bentham, a huge Timberlake fan, who has taken in TIFF each of the previous three years.

Besides the pandemonium surrounding his arrival to Roy Thomson Hall, Timberlake also created a frenzy on the Internet when he told an E! reporter that he would like to work with former Mickey Mouse Club cast member Britney Spears again – whom he dated from 1999 to 2002.

In addition to plugging his film with reporters on the TIFF red carpet, Timberlake – now married to actress Jessica Biel – also talked to a Toronto reporter about his one and a half year old son, Silas, and the challenges and joys of parenthood.

Having thoroughly enjoyed his experience at the Toronto International Film Festival, Timberlake tweeted out: “Good times Toronto! #TIFF16. Next up @Netflix Oct 12th” to his 55 million plus followers.

Besides finding success as a musician and actor, the married father of one also carries the title of record producer, business owner, and philanthropist.

Perhaps the most notable artist that Timberlake has written for and produced is Rihanna – first working with the singer from Barbados in 2009 on her second album Rated R.

As an entrepreneur, Timberlake and his wife are minority owners of the National Basketball Association’s Memphis Grizzlies.

Another notable business venture saw the long-time golf enthusiast purchase Big Creek golf course in his home town. Timberlake would then spend millions and turn it into the state of the art eco-friendly Mirimichi Golf Course.

While it was not a profitable investment, the venture to redevelop Big Creek  and save it from becoming a housing development had a special place in his heart because it was that same course he grew up playing in.

The efforts at his hometown golf course were not Timberlake’s only good deeds on the greens.

In 2007, the PGA announced that he would be the host of the Justin Timberlake Shriners Hospitals for Children Open.

As part of his involvement, the chart-topping artist hosted a charity concert with proceeds going to the Shriners Hospital for Children during the week of the PGA tournament in both 2008 and 2009.

As a self-described golf enthusiast, Timberlake frequently plays in PGA Pro Am events – including the Pebble Beach Pro Am in February – where he gave an impromptu performance on the 16th tee for his many fans in the gallery.

Besides his good deeds through golf, Timberlake and his wife also contributed to the Hurricane Sandy relief efforts in 2012.

Timberlake’s latest humanitarian efforts includes a remake of the 2003 smash hit “Where is the Love?” with proceeds going to fund educational programs.

While Timberlake continues to be idolized in Canada and around the world, Lee-Bentham says what the pop icon is doing with his current platform – being an ambassador for golf and to a larger extent making a difference for the betterment of society – is what’s most impressive and inspiring.

“I love that he uses his talents and gifts to influence change for the better,” said the former LPGA pro about Timberlake.

“It would be nice to have more role models like JT out there in the celebrity world for kids to look up to.”