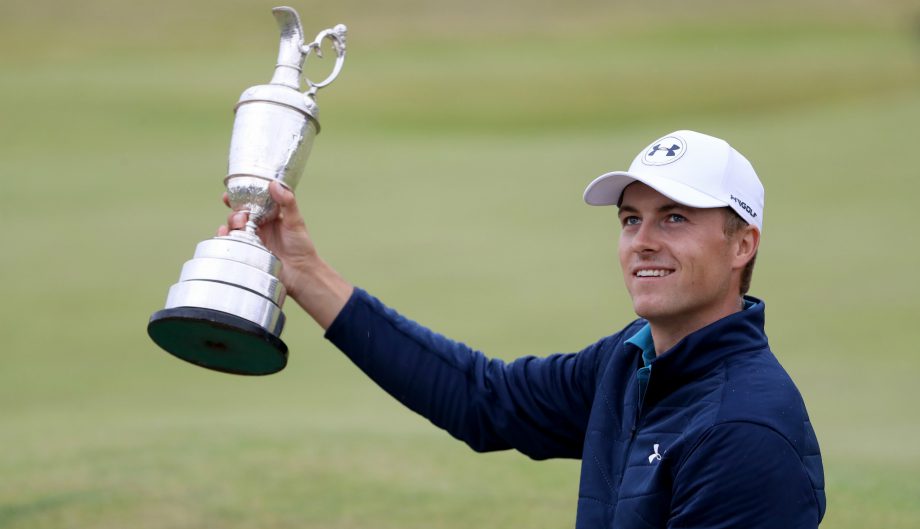 On the verge of another meltdown in a major, so wild off the tee that he played one shot from the driving range at Royal Birkdale and lost the lead for the first time all weekend, Spieth bounced back with a collection of clutch shots, delivering a rally that ranks among the best.

Spieth played the final five holes in 5 under and closed with a 1-under 69 for a three-shot victory over Matt Kuchar, giving him the third leg of the career Grand Slam and a chance to be the youngest to win them all next month at the PGA Championship.

Congratulations to @JordanSpieth on winning The 146th Open at Royal Birkdale! #TheOpen pic.twitter.com/NR3ahfcCGZ

For so much of Sunday, it felt like a recurring nightmare.

Just 15 months ago, Spieth lost a five-shot lead on the back nine at the Masters, coming undone with a quadruple-bogey 7 on the 12th hole. It was more of a slow bleed at Royal Birkdale, with three bogeys on the opening four holes and four putts inside 8 feet that he missed on the front nine to fall into a tie with Kuchar.

And then it all fell apart – or so it seemed.

His tee shot in the rain on the par-4 13th was so far right it sailed over the gallery, over the dunes behind them and was closer to the practice range than the fairway. When he finally found the ball, it was nestled in thick grass on a hill so steep Spieth could barely stand up.

Kuchar was 15 feet away for birdie, waiting – and waiting – on the green. Spieth appeared to be headed for a double bogey at best.

But the break of the tournament – and a moment that will rate alongside Seve Ballesteros making birdie from the car park when he won at Royal Lytham & St. Annes in 1979 – was when Spieth discovered the range was part of the course.

He took a one-shot penalty for an unplayable lie and took relief as far back as he wanted, onto the range, behind the equipment trucks. Then he received free relief from the trucks. That still left him a blind shot over the tall dunes to a fairway littered with pot bunkers.

His 3-iron stopped just short of one of them in front of the green, and he pitched over it to about 7 feet and holed the putt to escape with bogey.

Kuchar missed his birdie, but had the lead for the first time.

Spieth had momentum from his bogey, and his 6-iron landed in front of the flag and missed going in by inches. He made a 4-footer for birdie to tie for the lead, and then seized control with a 50-foot eagle putt on the 15th hole, looking at caddie Michael Greller filled with playful bravado and barking, “Go get that!”

Spieth said his caddie played a massive role in keeping his head in the game.

“I was getting down on myself, as I think anyone would,” Spieth said. “This is as much mine as it is his.”

Kuchar made birdie from the bunker on the 15th to stay one behind, but he had no answer when Spieth poured in a 30-foot birdie at the 16th. And after Kuchar rolled in a 20-foot birdie on the 17th to stay in the game, Spieth buried a 7-foot birdie on top of him to keep that two-shot lead going to the 18th.

The sequence left the crowd – the largest ever this week for a British Open in England – simply delirious.

And they weren’t alone.

“Is Jordan Spieth something else?” Jack Nicklaus tweeted.

Catch up with the highlights of an enthralling Final Round of The 146th Open. #TheOpen pic.twitter.com/ExeMn2KvTv

Zach Johnson, Justin Thomas and Rickie Fowler were among those who waited by the 18th to watch Spieth capture yet another major. Johnson won at St. Andrews two years ago, when Spieth missed the playoff by one shot in his bid for the calendar Grand Slam. Spieth drank wine from the jug that year, which he was told was bad luck for anyone wanting to possess the trophy one day.

“I started to believe them a bit through nine holes today,” he said. “It feels good to have this in my hands.”

From the driving range to the claret jug, Spieth put himself in hallowed territory just four days before his 24th birthday. He joined Nicklaus as the only player to win three different majors at age 23. Gene Sarazen in 1923 was the only other player with three majors that young. The Squire was 21.

Well played @JordanSpieth, congratulations on a magnificent achievement. Make sure you take care of the Claret Jug! ? #TheOpen pic.twitter.com/IWUtQR19ba

Spieth goes to Quail Hollow in North Carolina next month with a chance to get that final leg of the Grand Slam.

Kuchar closed with a 69 and did nothing wrong. He just had no answers for Spieth’s final blitz. Kuchar had a one-shot lead leaving the 13th green. He played the next four holes with two pars and two birdies and was two shots behind.

Spieth finished at 12-under 268. He became the first player to post all four rounds in the 60s at Royal Birkdale, which was hosting its 10th Open.

Li Haotong of China shot a 63 and finished third at 6-under 274. He was on the practice range in case the leaders came back to him, and Spieth joined him there as he tried to figure out how to get out of his pickle on the 13th.

Moments later, with one massive roar after another for Spieth’s theatrics, Li got in a cart and left.

Austin Connelly (73), a dual Canadian-American citizen who was born in Irving, Texas, tied for 14th at 2 under.