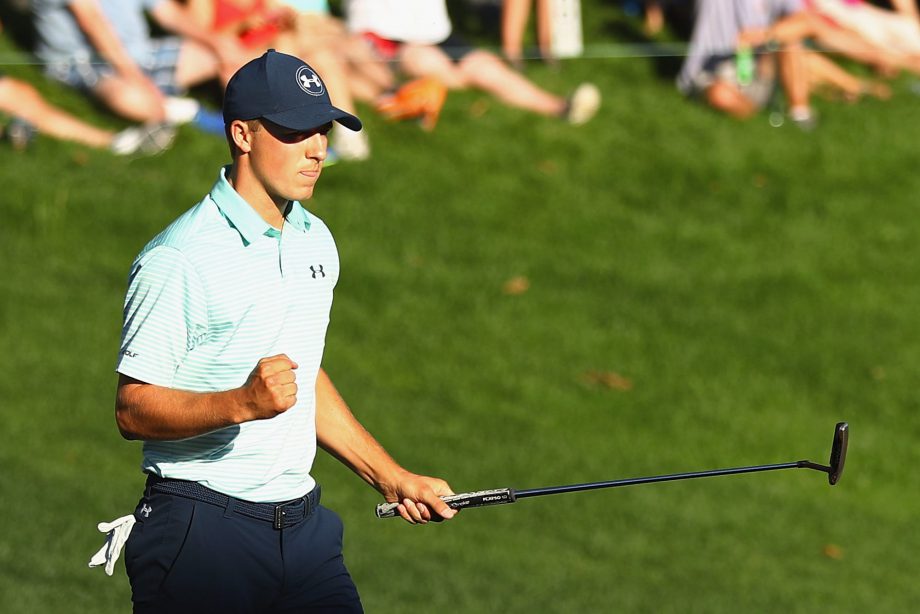 Jordan Spieth continues to play just a little better than anyone else at the Travelers Championship.

The 23-year-old Texan closed with a 20-foot birdie putt for a 4-under 66 on Saturday, giving him a one-stroke lead for the third straight round at TPC River Highlands.

After predicting earlier that it would take a score of 16 under to win, the two-time major champion took a 12-under 198 total into the final round.

Boo Weekley was second after a 65. The 43-year-old Weekley, playing just in front of Spieth, birdied five of the last eight holes, basking in the chants of “Boooo! Boooo!” from the raucous gallery.

Spieth bogeyed Nos. 13 and 14, but matched Weekley with three birdies on the final four holes, capping it with the final shot of the round from below the hole.

“It’s in the shadow,” Spieth said. “I’m looking to hit the putt at the right speed. If it goes in, great, if it doesn’t, so be it, tap it in. With a few feet to go it was going to have a chance and it curled right in the middle. That was a loud roar, and those are really fun to experience.

Weekley is looking for his fourth tour title and first since 2013. The colorful Floridian said he’s been dealing with personal issues, but declined to elaborate. His had a season-best tie for 37th at the Puerto Rico Open in March and has made just eight cuts in 21 events.

Spieth is looking for his 10th tour win and second this season after a victory in February at Pebble Beach.

Weekley acknowledged that makes for an odd final pairing Sunday.

“He loves to fish, so we’ve got a little in common there,” Weekley said. “So we can talk about that.”

Daniel Berger, looking for his second victory of the month, was three strokes back after a 66.

Because of morning showers, the players went off in threesomes from both the first and 10th tees. But the breeze helped the greens quickly dry out and play faster than had been expected.

Pan, who went out just after the rain ended, and shot a bogey-free round. The 25-year old former University of Washington star is looking for his third top-10 finish this season and his first since finishing second at Torrey Pines in January.

“It wasn’t as windy, so I made birdies on three of my first four holes,” Pan said. “That really helped my mindset and keep my momentum going.”

Spieth hit his first six fairways and got his first birdie of the day on the sixth hole, when he chipped in from 30 feet behind the green. He made another birdie on the next hole, before giving a shot back at No. 9. He repeated that pattern on the back nine, making birdies at 10 and 11 to go up by two strokes, then put his tee shot into the water at 13. He bogeyed that hole and 14.

But on 15, his chip from the greenside bunker landed inches from the hole and he had another birdie.

Spieth has a chance to join Phil Blackmar (1985) as the only players to win in their first start at the Connecticut event. He’s also trying to become the first player to lead wire-to-wire alone in the event since Tim Norris in 1982 at Wethersfield. Peter Jacobsen had at least a share of the lead after every round in 2003.

Berger had just one bogey, at the 17th, but came back with the last of his five birdies on the final hole. He won in Memphis two weeks ago before missing the cut at the U.S. Open, which was won by his Florida State teammate, Brooks Koepka. Another former Seminole teammate, Chase Seiffert, was in contention at 4 under after qualifying for the tournament Monday.

Rory McIlroy remained at even par. He’s been trying to find his short game this week and decided to switch Saturday from the putter he began using while at the U.S. Open. He spent time before his round on the practice green with several different putters before picking a new one.

The change didn’t seem to help. His first putt Saturday, a birdie attempt from 12 feet, went 3 feet past the hole and he needed 33 putts during his round of 70. He was even par overall.