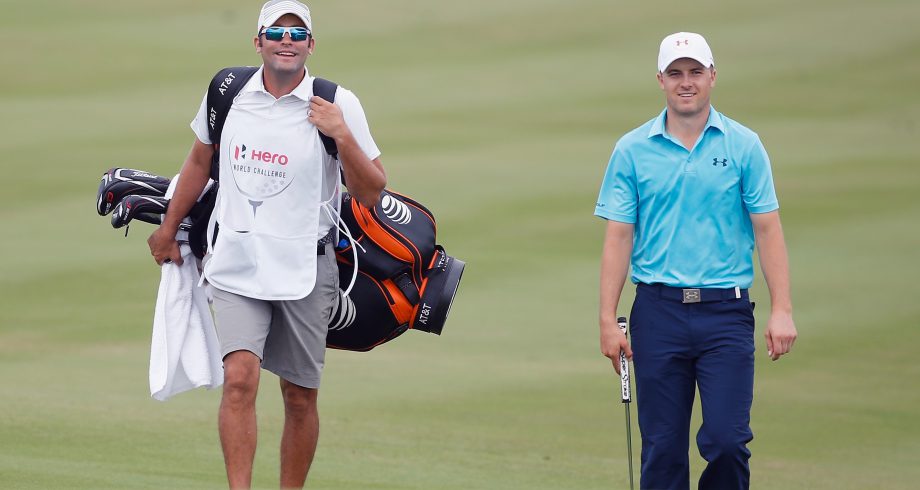 NASSAU, Bahamas – Jordan Spieth feels like he’s on vacation in the Bahamas. On the golf course, he’s all business.

Spieth rallied from a rugged start Friday with three straight birdies, and then a surge on the back nine carried him to a 6-under 66 and a share of the lead with Jimmy Walker and Bill Haas going into the weekend at the Hero World Challenge.

“The grind is still there,” Spieth said.

He had to work hard just to keep pace on a calm, muggy afternoon is the islands, where the wind wasn’t strong enough to blow out a match and it showed in the scoring. Rarely has this holiday event with an 18-man field featured so many players near the lead.

For one brief moment on the back nine, there was a seven-way tie for the lead.

Walker, who began working on a new move in his swing just over a week ago, drove the ball as well as he has all year on his way to a 67. Haas, who received one of the two sponsor exemptions to the tournament hosted by Tiger Woods, had a 66.

Spieth is wrapping up a big year, and he seems intent on going out in style. He traveled from Sydney to the Bahamas (with a brief stop at home in Dallas to do laundry) and began his push up the leaderboard with an eagle on the par-5 11th hole from about 30 feet. He followed with two more birdies to get a share of the lead.

“It’s still all about rest,” Spieth said. “Coming off how much golf we’ve been playing, I’m still going to be about making sure I’m resting. … But on the golf course, I’m still getting as intense and upset and highs and lows that I experience at a normal PGA Tour event.”

Spieth also was at 11-under 133 a year ago in the Hero World Challenge at Isleworth in Florida. That was good for a two-shot lead, and a 63-66 weekend allowed him to win by 10 shots. This is far different. Half of the field was separated by only three shots.

“The scores are just really good, which makes for an exciting weekend, and I’m just happy to hold my own weight for two days,” Haas said. “I think if I shoot 11 under on the weekend, then I’ll have a really good shot. Simple as that sounds, that’s the way you’ve got to keep it. If I play well, I think I’ll have a chance. But if I don’t, there are so many players that are playing well, the best players in the world, I’ll fall back pretty quickly if I don’t.”

Walker went to see Butch Harmon at the start of last week in Las Vegas to start working on a move where his head moves at impact, which keeps him from having to rely so much on timing. It’s coming together nicely – and quickly.

“Driving the golf ball today, I haven’t had that much fun in a long time, to be honest,” Walker said.

No one has been playing more than Reed, or more places. And he’s been playing well. He has recorded top 10 finishes in five tournaments since the Tour Championship in Hong Kong, Malaysia, twice in Shanghai and Dubai. He’s happy with his performance, though far from satisfied.

“I know to get to all my goals I need to get Ws,” he said. “Top 10s, top 5s aren’t going to cut it where I need to get to. Those are good fill-in weeks, but we need to get in contention a little more. We need to close some tournaments off.”

Not everyone took advantage. Billy Horschel had eight birdies and no bogeys on his card, which ordinary would please him greatly – except that he took a double bogey on the par-3 second hole, and a quadruple-bogey 9 on the par-5 11th hole without hitting into the water. He had a plugged lie under the lip of a bunker that he shanked into a bush, and his troubles ended with what he called a “good putt for a 9.”

“This round today is very much how my year went,” Horschel said with a grin.

Anirban Lahiri of India, who also received a sponsor exemption, was a little more exasperated. Lahiri felt as though he hit the ball well enough to be double digits under par. Instead, a double bogey on the 18th hole gave him a 70 and he was six shots behind. It felt worse.

“If my mom had putted, she would have shot 65,” Lahiri said.

Justin Rose couldn’t get home fast enough after his round of 72, which didn’t take long because Albany is now his primary residence. That made it even more frustrating.

“You’d think I had never seen these greens before,” Rose said.