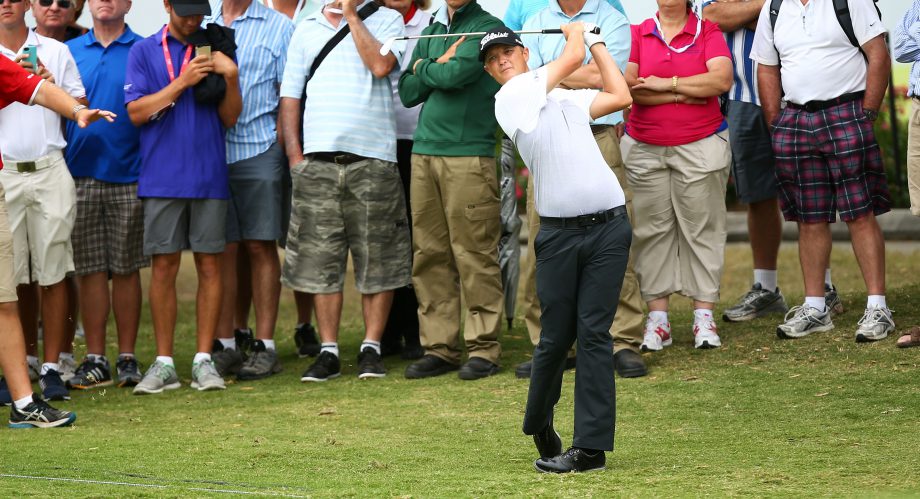 SYDNEY – Matt Jones shot a 3-under 68 to hold a three-stroke advantage over a surging Jordan Spieth after the third round of the Australian Open on Saturday.

Defending champion Spieth holed out with his shot from the fairway on the par-4 17th for an eagle, then had a tap-in birdie on 18 for a 67.

With gusty winds again affecting play on The Australian Golf Club course where Jones is a member, the U.S. -based Australian had a 54-hole total of 10-under 203.

Australian Rhein Gibson was in third after a 68, five behind Jones.

Adam Scott rebounded from a 73 on Friday to shoot 68, including an eagle on the 18th. He’s tied for seventh, nine strokes behind, as is European Ryder Cup captain Darren Clarke, who shot 70.

There were only nine golfers under par. The course has been tough, with only 18 under par after the first round and 12 after the second.

Spieth had a roller-coaster of a front nine in which he bogeyed three of his first four holes and birdied the next two before finishing the front nine with a bogey and a birdie – just two pars going out.

Spieth settled down initially on the back nine and had two birdies on 12 and 14 with a 10-foot par save on the 13th. The fireworks came with his shot on the 17th – an 8-iron from 181 yards which hit the front edge of the green and rolled straight toward the flag, gently nudging the pin before falling straight down into the hole.

The 22-year-old American threw his hands in the air, high-fived his caddie, Michael Greller, then gave him a light punch in the chest.

“I struck it nicely, there’s not too much room to land it, up there,” Spieth said. “It was one of the great fightbacks I’ve had … I fought hard.”

Last year, Spieth shot a final-round 63, a record on the revamped Jack Nicklaus-designed course, to win by six strokes.

Jones provided some late theatrics of his own, putting from well off the green on the 17th to hole it for birdie.

“One more to go, and I get to play with the No. 1 player in the world,” Jones said of his final-round pairing with Spieth in the 100th Australian Open. “It will be a lot of fun.”

Scott ended a birdie drought not with his troublesome putter but by chipping in from just off the green on the third hole. It came after he failed to make a birdie in his Friday round, and Scott said he couldn’t recall the last time that had happened.

“It was hard-going out there today, windy, the pins were tucked, but I made some putts,” Scott said. “It was a little bit of everything, but it all added up.”

Scott, who was also nine strokes behind after the second round, said he still felt he has a chance to win on Sunday, which would be his second Australian Open title after winning in 2009. Scott, who has not won this year, has a streak of winning at least one tournament every year since 2001.

“Absolutely, it’s huge for tomorrow, just going out there, teeing off under par,” Scott said of his 3 on the last. “At least I clawed into red figures and start tomorrow hopeful of something special. There was a lot of good in it, even though I didn’t hit great shots all day. My scrambling was 10 out of 10, that’s for sure.”