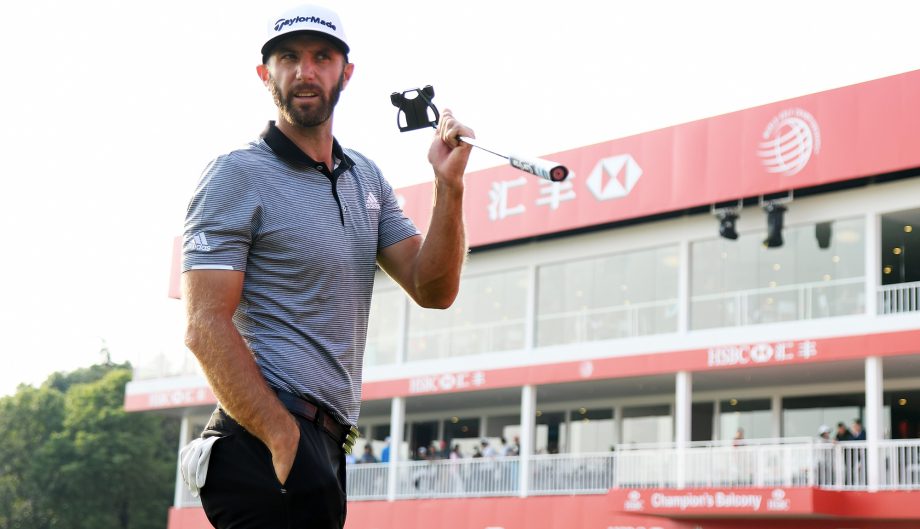 SHANGHAI – Dustin Johnson and Brooks Koepka, close friends who live down the street from each other in Florida, are in the final group going into the weekend at the HSBC Champions. They are separated by one shot, so it might feel like one of their money matches when they play together at home.

There’s just one problem with that.

“We don’t really play much golf,” Johnson said after his 9-under 63 for a one-shot lead Friday at Sheshan International. “We go to the gym and we hang out, but we don’t go to the golf course together. We played last Saturday, and that was the first time we played in … I couldn’t tell you how long. All year, probably.”

They won both their matches as partners at the Presidents Cup, and Koepka says they saw each other for 14 out of their 21 days at home.

It just didn’t involve much golf.

That figures to change at the final World Golf Championships event of the year, and it could be quite a show.

Johnson, the No. 1 player in the world who has been alternating between two putters over the last few putts, brought a third option to Shanghai. This had a mallet head, and it lasted all of one round. So he got a fourth one – a TaylorMade Spider with a metal insert that wasn’t quite as soft as the version he used to win three straight times in the spring. He hit a few putts, went onto the course and made just about everything.

“The guys here in China made me one. I got it right before I walked to the tee,” Johnson said. “I hit a few putts on the practice green with it and I was like, ‘Oh, this will work pretty well.’ Went out and holed a lot of putts today, so I kind of like it.”

Two of his closing birdie putts were in the 15-foot range, and he finished with a 5-foot slider on the 18th to reach 13-under 131.

Koepka, who led after the first round with a 64, had what he referred to as a relatively boring day, at least in the middle. He opened with two straight birdies, followed with 13 consecutive pars, and then birdied two of his last three holes for a 68.

They will be joined by Justin Rose (68), making that three of the last five U.S. Open champions in the final group Saturday.

Johnson and Koepka are naturals as friends. Both cut supremely athletic figures and are among the biggest hitters in golf. Neither gets overly worked up over anything. Their celebrations are subdued, even when winning U.S. Opens.

Koepka talks a little more, which is not much. He was one shot behind going into the final round of the U.S. Open and Johnson called him that Saturday night. Koepka described it as a “long phone call for us. It was like two minutes.” It was a rare conversation about golf. Johnson simply told him that he was playing well and not to worry about anything else.

“We both kind of have the same attitude,” Koepka said. “We’re not going to take things too seriously. We like to relax. We like to work out. We’ve got the same interests, and that makes it easy. To be honest with you, I don’t think we’ve ever really talked about golf. Maybe when we play practice rounds, that’s about the only time we ever talk about golf. When we’re away, we’re away and I think that’s kind of one of the beauties of our friendships.”

Johnson won the HSBC Champions in 2013, and he looks formidable when he’s making putts, as was the case on Friday. After a relatively slow start, with birdies on both par 5s on the front, he ran off seven over his last nine holes for a 29 on the back nine. The two holes he failed to birdie were No. 11, where he missed a 10-foot birdie putt, and the par-5 14th, where he had 6-iron into the green for his second shot.

Koepka felt as though he left his share of shots out there, too. On three of the par 5s, he missed birdie chances from 8 feet or in.

Kiradech Aphibarnrat of Thailand had a 70 and joined Rose at 9-under 135. Patrick Reed, who has gone 14 months without winning, shot 70 and was six behind.

Johnson and Koepka first played together in the third round of the 2014 U.S. Open at Pinehurst No. 2, a vague memory for Koepka. He just remembers Johnson having to hit one shot left-handed, and neither of them having much of a chance against Martin Kaymer that week.

They last played together in the opening two rounds at Firestone in the Bridgestone Invitational, though they are regulars in practice rounds at the majors. Koepka would like nothing better than for them to have a chance on the final nine Sunday.

“I have no problem breaking Dustin’s heart. I can promise you that. I’m sure he’d say the same thing if he was sitting up here,” Koepka said. “We both have a lot of fun off the golf course, but when it comes to golf, I think we both want to kick each other’s butts. There’s no mercy out there. When we both show up, I think we’re both expecting to win.”

Adam Hadwin of Abbotsford, B.C., slipped 17 spots down the leaderboard following a 2-over-par 74 to sit T38.