Johnson polishes off a dominant victory at BMW Championship 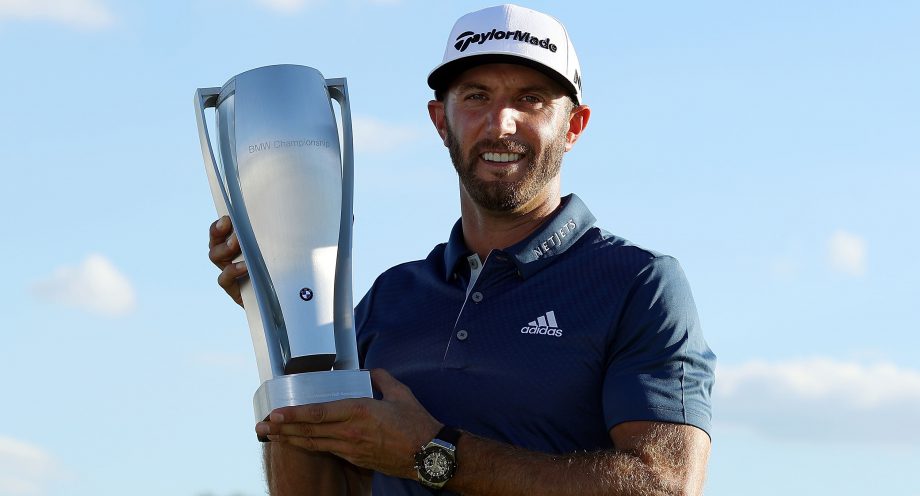 CARMEL, Ind. – Dustin Johnson knows as well as anyone that no matter how good he is and how well he plays, something can always go wrong in golf.

Just not this week at the BMW Championship.

Not this year, really.

An awesome talent, Johnson is starting to pile up the victories to prove it. He ran off four birdies in a five-hole stretch to regain control Sunday, left Paul Casey feeling helpless by matching his eagle putt late in the round and sailed home to a 5-under 67 for a three-shot victory at Crooked Stick.

“Ran into a buzz saw,” Casey said after a 67 to finish runner-up in a FedEx Cup playoff event for the second straight week. “That was something special the last two days, and I did everything I could. So I’m holding my head up very high.”

Johnson, though, it at another level right now.

Known for so many years as the guy who couldn’t catch a break in the biggest events, he won for the third time in eight starts dating to his first major at the U.S. Open. And this might have been his most complete performance. Powerful off the tee, relentless with the putter, dialed with his wedges, there was no stopping him.

“I’ve got a lot of confidence in every part of my game,” Johnson said.

He just doesn’t have much to say about it, mainly because he doesn’t need to.

Casey’s last hope came on the par-5 15th when he rolled in a 25-foot eagle putt to get within one shot. That lasted as long as it took Johnson to line up his 18-foot eagle putt and pour it in to restore his three-shot margin.

He finished at 23-under 265 and went over $9 million in earnings for the year, along with taking the No. 1 seed in the FedEx Cup to the finale in two weeks at East Lake for the Tour Championship.

The consolation for Casey, along with $1,836,000 for his two runner-up finishes, was the No. 5 seed at the Tour Championship in two weeks. That means he only has to win at East Lake to capture the $10 million bonus.

Rickie Fowler won’t have any chance at all.

Fowler, who started the week at No. 22 in the FedEx Cup , closed with a 71 and finished 59th at Crooked Stick. He was bumped out of the top 10 by the smallest margin in the 10-year history of the FedEx Cup – 0.57 points behind Charl Schwartzel, who closed with a 64.

The timing is particularly bad for Fowler because Davis Love III makes three of his captain’s picks for the Ryder Cup on Monday, with another one right after the Tour Championship. Fowler won’t have another chance to audition, though he might get picked on Monday, anyway.

Asked if he had done enough to be picked, Fowler said, “I would like to think so.”

“I’ve done basically everything I can do as far as schedule and playing,” said Fowler, who left the Olympics to play the following week on the PGA Tour. “It would have been nice to play better to make the pick a lot easier on him. But whether he has his mind made up or is still thinking, that’s up to him.”

Fowler’s hopes came down to J.B. Holmes in a finish that had nothing to do with the trophy. Fowler would have made it to the Tour Championship if Holmes made either a birdie or a bogey. Holmes would have been eliminated with a bogey.

He drilled it down the middle of the fairway, hit the green, lagged a 40-foot putt to 4 feet and made it for par for a 74.

“I envisioned it being a little bit better than that going into the day, but that’s how it is,” Holmes said. “You don’t always have your best game, and I was able to finish it off and get in the Tour Championship.”

Holmes tied for fourth, key for him because the big hitter from Kentucky also needs a captain’s pick to play in the Ryder Cup. Holmes finished at No. 10 in the Ryder Cup standings, one spot ahead of Fowler. David Hearn of Brantford, Ont., shot a 71 to finish the event tied for 32nd at 5-under 283.

“I feel like I played well enough to get that shot,” Holmes said. “We’ll see.”

Roberto Castro holed out for eagle from the seventh fairway on his way to a 67 to finish alone in third, sending the Georgia Tech grad and Atlanta resident home to play in the Tour Championship for the second time.

All this activity was far more compelling than the actual tournament, for Johnson never looked as though he was going to lose – no matter how well Casey played. Casey is playing some of his best golf in seven years, and he now has a clear shot at the $10 million bonus at East Lake.

“If I don’t run into Dustin in two weeks,” he said, “I got a great chance to maybe win the FedEx Cup.”