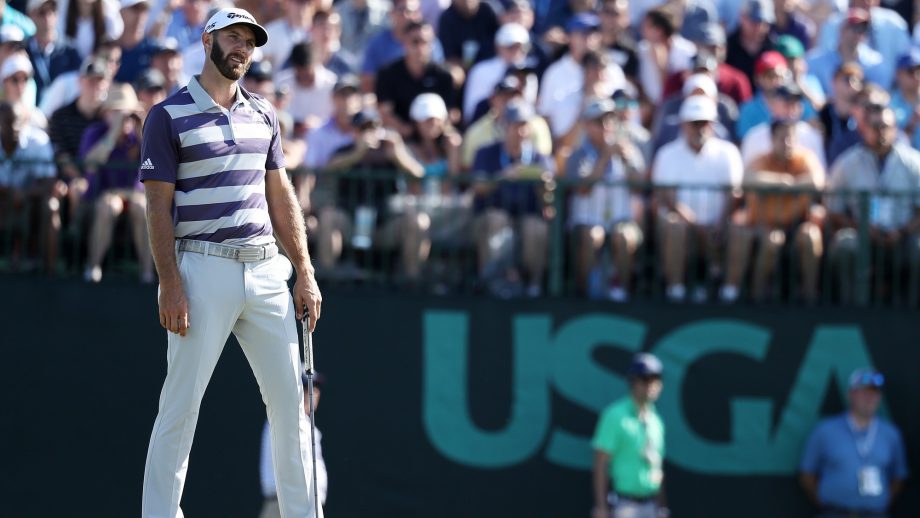 SOUTHAMPTON, N.Y. — Dustin Johnson at least gets one more round to try to redeem himself in the U.S. Open.

So does the USGA.

The best players in the world were no match for a Shinnecock Hills course that even the USGA conceded got out of hand Saturday. Putts were rolling some 50 feet by the hole and over the green. No one from the final 22 groups could match par. Phil Mickelson intentionally broke a rule on the 13th when he trotted to his ball rolling by the cup and swatted it with his putter as the ball was still moving.

“It was a very tough test, but probably too tough this afternoon,” said Mike Davis, the USGA’s chief executive. “We must slow the courses down tonight, and we will.”

It was too late for one of the wildest Saturday shake-ups at the U.S. Open.

Daniel Berger and Tony Finau, who started the third round 11 shots out of the lead, each shot 4-under 66 before Johnson hit his first shot. Johnson faced greens that made him feel as though he were putting on glass, and it was like that to the very end.

Johnson, who started with a four-shot lead, barely nudged his 17-foot birdie attempt on the 18th hole and watched it roll _ and roll — 8 feet by the cup. He missed the par putt coming back and signed for a 77 to fall into a four-way tie for the lead.

“I didn’t feel like I played badly at all,” Johnson said. “Seven over usually is a terrible score, but with the greens the way they got this afternoon, I mean they were very, very difficult. I had seven or eight putts that easily could have gone in the hole that didn’t. And that’s the difference between shooting 7 over and even par.”

At least he still has a chance, and he had plenty more company at the top than at the start of the day.

Johnson joined Berger, Finau and defending champion Brooks Koepka (72) at 3-over 213, the highest 54-hole score to lead the U.S. Open since the fabled “Massacre at Winged Foot” in 1974.

It was the first time since Oakmont in 2007 that no one was under par going into the final day. With wind that was stronger than expected, and a few pin positions that turned the U.S. Open into carnival golf, it was easy to see why.

Davis told Golf Channel he would have liked a mulligan, the same word he used nearly a month ago when discussing the 2004 U.S. Open at Shinnecock Hills when the seventh green wouldn’t hold shots and had to be lightly sprayed with water between groups.

That didn’t go over well with Ian Poulter after a 76.

“Is that an apology?” he tweeted . “You don’t get mulligan’s in business at this level. how can this team keep doing this without consequences.”

Mickelson brought plenty of attention to the 13th hole, where anything that ran by the cup was headed off the green. Worst yet might have been No. 15, where Piercy had a 30-foot birdie putt that finished rolling 75 feet away off the green. Koepka hit an approach to near the hole, and it moved a few inches to the right, and then a few more feet, and soon it was in a bunker.

“You were seeing shots that were well played and not rewarded,” Davis said.

Berger and Finau, who made the cut with one shot to spare, will play in the final group.

“I barely made the cut. Going into today, I needed something special to happen to even have an outside chance,” Finau said as Johnson and Scott Piercy were making their way down the first fairway in the final group. “Whether I do or not at the end of today, I’m really happy with where I’m at.”

Right behind them will be the last two U.S. Open champions. Koepka made only two birdies in his hard-earned round of 72, leaving him poised to become the first player since Curtis Strange in 1989 to win back-to-back in the U.S. Open.

Only three players broke par, all before the final groups teed off.

“If they’d have shot 4 under this afternoon, it would probably have been the best round of golf anybody’s ever seen,” Koepka said.

Two other major champions — Justin Rose and Henrik Stenson —were right behind, and both had a share of the lead at one point. Both had three straight bogeys. Rose wound up with a 73 and was one shot behind at 214. Stenson had a 74 and was another shot back.

The return to Shinnecock Hills was supposed to make the U.S. Open feel like a traditional test that felt more like survival.

“Be care what you wish for,” Rose said. “We’ve all been asking for a real U.S. Open again. So I guess we got one for sure this week.”

And typical of an old-styled U.S. Open, there were plenty of complaints.

“I’m going to find Mike Davis,” Pat Perez said after signing for a 77. “It’s the U.S. Open. It’s supposed to be hard. When is enough enough? It’s not about hard. There’s no other tournament where you see the guys putt off the greens.”

Not all the statements were verbal.

Mickelson celebrated his 48th birthday by matching his worst score in his 27th U.S. Open with an 81, and he provided the snapshot of a day that was entertaining for reasons the USGA didn’t imagine.

He went from behind the 13th green all the way off the front. His next shot was 18 feet above the hole. His bogey putt slid by, and after a few putts, Mickelson trotted after it and then stuck out his putter and hit the ball back toward the cup to keep it from running off the green. That’s a two-shot penalty, giving him a 10.

“It’s just a moment of madness,” said Andrew “Beef” Johnston, who played with Mickelson and couldn’t stifle a laugh.

Mickelson apologized if anyone was offended by his act, even after saying he knew the rules for hitting a ball in motion and was happy to take a two-shot penalty instead of playing a crude version of tennis with his ball going back-and-forth, back-and-forth across the green.

“Look, I don’t mean disrespect by anybody,” Mickelson said. “I know it’s a two-shot penalty. At that time I just didn’t feel like going back and forth and hitting the same shot over. I took the two-shot penalty and moved on. It’s my understanding of the rules. I’ve had multiple times where I’ve wanted to do that, I just finally did it.”

Johnson didn’t have anything that wild – not like the 82 he had at Pebble Beach when he entered the final round with a three-shot lead in the 2010 U.S. Open. This was more of a slow bleed that began with a shot off a sandy path and three putts on the par-3 second hole for his first double bogey of the championship. His lead was gone with a three-putt bogey on the par-3 seventh. He was back in the lead when everyone around him couldn’t hang on.

Kiradech Aphibarnrat had the only other round under par. He made the cut on the number, was the seventh player to tee off and shot 2-under 68. He goes into the final round just three shots out of the lead.