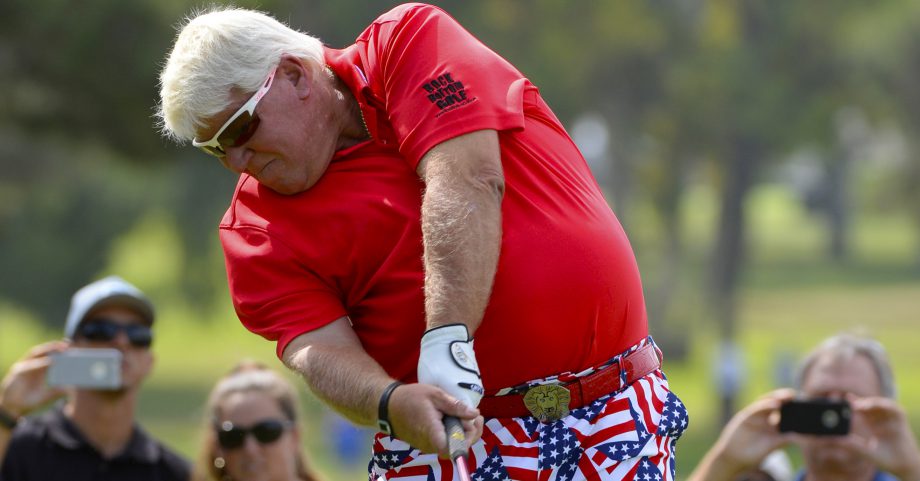 Making his 14th PGA Tour Champions start since turning 50 in April, the long-hitting Daly finished with a 4-under 67 at Newport Beach Country Club after playing the front nine in even par and dropping a stroke on 13.

“This course, you short-side yourself you can make some big numbers, but it’s a golf course that if I keep hitting the driver straight, you can score,” Daly said. “A lot of wedges into a lot of the holes.”

The two-time major champion has three top-20 finishes on the senior tour, the best a tie for 11th in July in New York at the Dick’s Sporting Goods Open.

“I’ve been hitting it pretty good and just the two weeks off did me some good,” Daly said. “My shoulder’s still not good, but I’m able to hit full shots. I’m struggling with three-quarter shots, which might not make sense, but every time I try to pinch one, it hurts like heck. But the full shots are OK and luckily that’s what I had coming down the stretch today.”

“I’ve always played this course well,” said Haas, the 2007 winner. “I lost the next year in a playoff to Bernhard (Langer), and then the next two years, probably playing as good as I could play in my Champions Tour career. … I’ve had some good success here and I just like the golf course. It seems to set up nicely for me and looks good to my eye.”

Mayfair eagled the par-5 third and had six birdies – four on the last five holes – and one bogey. He’s making his sixth start on the tour after turning 50 in August.

“You’ve got to get out on Friday and get off to a good start,” said Mayfair, a five-time winner on the PGA Tour. “You’re going to have to shoot this every day to have a chance to win.”

In his Champions debut, he tied for second behind Gene Sauers in the U.S. Senior Open.

“I really want to come out here and have fun and enjoy myself but be very competitive,” Mayfair said.

“I’ve been trying too hard,” Mize said. “I tried to just relax and have fun. As crazy as it sounds, care a little less and just go out there and don’t let anything bother you and just have a good time.”

“The golf course is there to be had, but if you hit in the wrong place here, you’re going to make bogeys,” Goydos said. “Today, I probably should have made three bogeys and I made none.”

Colin Montgomerie had a 68. He’s coming off a victory two weeks ago in British Columbia.

Langer, the tour leader with four victories, is taking the week off. He also tops the money list and Charles Schwab Cup points standings.