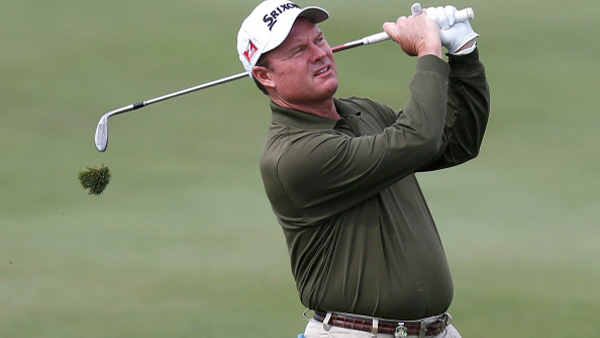 BENTON HARBOR, Mich. – Joe Durant birdied his final hole Thursday for a 6-under 65 and a one-stroke lead after the first round of the Senior PGA Championship.

Making his third Champions Tour start after turning 50 in April 7, the four-time PGA Tour winner had seven birdies and a bogey at Harbor Shores.

Dan Forsman, fighting an arthritic left hip, opened with a 66, and Brad Faxon had a 67. Mark Brooks and P.H. Horgan III shot 68, and two-time Senior PGA winner Jay Haas and Colin Montgomerie were in the group at 69.

Durant, coming off a ninth-place tie Sunday at Shoal Creek in the first major of the year, missed only one fairway and birdied all the par 5s. He and also birdied the par-4 seventh hole that plays up a sand dune and usually into the wind off Lake Michigan.

Forsman, a three-time winner on the Champions Tour after winning five times on the PGA Tour, had four birdies and a bogey – on the seventh – in his final nine holes.

Faxon made two 35-foot birdie putts early in his round. He has only one top-40 finish in eight tournaments this year and missed the cuts in his two previous Senior PGA appearances.

Lee Rinker, who played the PGA Tour fulltime from 1984 to 1999, was the top club pro with a 69. He’s the director of golf at Emerald Dunes Golf Club in West Palm Beach, Florida

Japan’s Kohki Idoki, the winner last year at Bellerive in St. Louis, had a 76.

Stephen Ames, a rookie on the Champions tour, shot 71 on the first day to tie him for 31st.