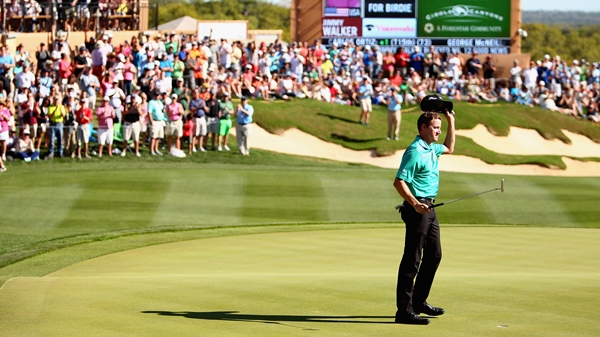 Walker closed with a 2-under 70 to finish at 11-under 277 at TPC San Antonio, a 35-minute drive from his home. The 36-year-old former Baylor player won the Sony Open in Hawaii by nine shots in January and has a tour-best five victories in the past two seasons.

Spieth also finished with a 70, making four late birdies in a row. The 21-year-old Dallas player was coming off a playoff victory two weeks ago at Innisbrook.

Walker and Spieth will move to career highs in the world ranking, with Spieth going from sixth to fourth and Walker from 13th to 10th.

FedEx Cup champion Billy Horschel was third at 4 under after a 71.

Daniel Summerhays, second last year behind Steven Bowditch, tied for fourth with Chesson Hadley at 3 under. Summerhays closed with a 69, and Hadley had a 71.

Doral winner Dustin Johnson shot his second straight 68 to match Ryan Palmer at 2 under. Palmer also had a 68.

Phil Mickelson, looking for some momentum heading to the Masters, closed with a 76 to drop into a tie for 30th at 4 over.

Ten players finished under par, with the Oaks Course playing the toughest on the PGA Tour this season with a 74.581 stroke average – more than two shots over par. The previous high was PGA National’s Champion course at 1.832 over par for the Honda Classic.

Marc Warren and Harris English failed to crack the top 50 in the world ranking, which would have given them spots in the Masters. Warren, 52nd, needed to finish ahead of Brendan Todd to get in, but closed with a 70 to finish 35th. English, 53rd, needed at least a top 10. His final-round 72 only got him to 30th.