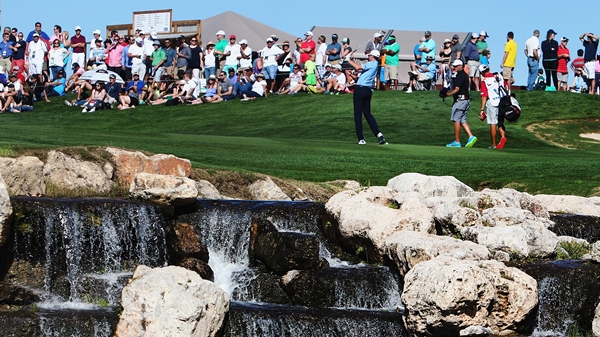 SAN ANTONIO – Jimmy Walker opened a four-stroke lead over fellow Texan Jordan Spieth, shooting a 3-under 69 on Saturday in his hometown Texas Open.

Walker, who lives 35 minutes away from TPC San Antonio, is looking for his fifth title in two tour seasons. He had a 9-under 207 total after opening with rounds of 71 and 67.

“It’s a tough golf course,” said Walker, the winner of the Sony Open in Hawaii in January. “I thought coming into today that even par or maybe 1 under would be a good score. You definitely want to find a way to extend the lead, but you have to be smart about it.”

Spieth shot a 71. The 21-year-old Dallas player, coming off a playoff victory two weeks ago at Innisbrook, had a double bogey, two bogeys and two birdies on the final six holes.

FedEx Cup champion Billy Horschel birdied the final three holes for a 69 to get to 3 under.

“I wanted to give myself some opportunities coming in,” Horschel said. “It was a nice one to get at 16 – it was blowing downwind and that green has been pretty firm all week. And they had the tees moved up at 17 and 18, just straight downwind today.”

Five players were seven back of Walker at 2 under. Zach Johnson birdied the last two holes for a 72, Chesson Hadley had a 71, tour rookie Scott Pinckney shot 69, 2011 champion Brendan Steele had a 72, and Jason Kokrak finished with a 71.

Phil Mickelson was even par after a 74. He had a near double-eagle on the 14th hole.

Tied making the turn, Walker broke away from Spieth with a two-shot swing on the par-5 14th and extended when Spieth hit his tee shot at the par-3 16th into more trouble well right of the grandstand.

Both players have long-established roots in Texas. Spieth played on the Texas Longhorns’ national champion team in 2012, and Walker was an All-American at Baylor.

“Jordan and I played the first two days out here and we had a lot of people,” Walker said. “We’ll probably have even more people tomorrow. It should be fun.”

Playing in the group ahead at No. 14, Spieth left a long bunker shot in the sand and failed to make a 13-footer once he got on the green.

Walker planted a wedge shot a foot away from the cup and made birdie.

Spieth got a shot back with an 8-foot birdie putt at 15, then hit a tee shot on the 191-yard 16th that ended up about 40 yards right of the green. He took two chips and lipped out a 4-footer en route to a double bogey.

“I’m going to have to hit the ball better than I did today,” Spieth said. “A couple of tough breaks on the back nine. All in all, I was playing a really solid round of golf, minus a couple of decisions and a couple of swings.”

Spieth bounced back to birdie the short par-4 17th.

Walker also birdied 17 after hitting a short pitch to 7 feet away. He capped his round with a 9-foot birdie putt on 18.

Mickelson had all sorts of short-game troubles while shooting a front-nine 40.

He nearly holed out for double-eagle from 258 yards on the par-5 14th. His eagle put him back in red figures, but he bogeyed 16.