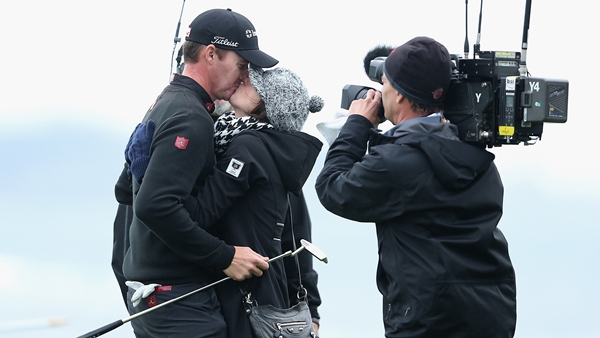 PEBBLE BEACH, Calif. – The finish wasn’t what Jimmy Walker wanted. The result is what he’s come to expect.

Walker led by as many as six shots Sunday in the AT&T Pebble Beach National Pro-Am, only for it to be decided by his final putt. He ran his birdie attempt 5 feet by the hole and had to make that for par to close with a 2-over 74 and a one-shot win over Dustin Johnson and Jim Renner.

But it was a familiar outcome for Walker, a 35-year-old Texan who only four months ago was regarded as one of the best players to have never won on the PGA Tour. This was his third win of the PGA Tour season, a streak that began in October about an hour away at the Frys.com Open.

Walker joined some exclusive company. He is only the fourth player in the last 20 years to win three times in his first eight starts to a season. The others are Tiger Woods (who has done it eight times), Phil Mickelson and David Duval.

For a brief moment, it looked as though Walker might have a chance to join Greg Norman and Sergio Garcia as players to lose a six-shot lead in the final round.

He was never seriously challenged until Johnson, and then Renner, put together a strong finish. Johnson, a two-time winner at Pebble Beach, closed with a 66 on a card that included three bogeys. Renner, who had yet to make a cut all year, made five birdies on the back nine for a 67.

Walker made a 10-foot birdie on the 11th hole and was seemingly on his way.

From 25 feet above the hole, he hit the birdie putt too hard and had one anxious moment.

“I hate three-putting,” Walker said. “I had two of them back there, and definitely didn’t want another one on the last.”

Walker finished on 11-under 277 and earned $1.188 million, expanding his lead in the Ryder Cup standings to more than $1 million over Mickelson in second place. The Ryder Cup is based on PGA Tour earnings, though there are still four majors (which count double), three World Golf Championships and The Players Championship remaining.

For now, the stars are aligned for Walker better than anything he sees through his high-powered telescope.

“I just go out and play golf,” Walker said. “This is what I want to do and I’ve worked really hard to do it, to be here, and to be in this position and it’s really cool.”

Jordan Spieth had to return Sunday morning to complete his third round, which ended with his sixth three-putt of the round for a 78. He faced Pebble at its most vicious throughout the third round, though he bounced back with a bogey-free 67 to at least tie for fourth with Kevin Na (69).

And he hasn’t lost his sense of humour.

“Yesterday was a day where you want to play Pebble Beach in that weather once in your life,” Spieth said. “You just don’t want it be Saturday when you’re in the lead.”

Chalk it up to another learning experience for Spieth, who said his 36 putts were more a product of not having the speed than the less-than-smooth quality.

“I felt like I needed birdies when I didn’t,” he said.

Another strong finish belonged to Graeme McDowell, returning to Pebble for the first time since his U.S. Open title in 2010. He closed with a 67, happy with a week in which he would have settled for just knocking some rust off his game before heading to Riviera next week.

Outside of Walker, however, the big winner was Renner.

He was among the Web.com Tour graduates who played poorly in the four “finals” event that determine priority ranking, and struggled to get into tournaments. In his fifth start, he not only made his first cut, Renner earned a spot at Riviera next week and will be in better position to get into events over the next couple of months.

“It was pretty big,” Renner said. “I just knew I needed a good week. My back was up against the wall, and that’s something I’m familiar with and I don’t mind it. But I’m happy that I freed myself up a little bit for the rest of the year.”

DIVOTS: Jim Renner and John Harkey Jr., the CEO of Consolidated Restaurant Operations, Inc., won the pro-am portion of the tournament. … Tim Wilkinson, playing in the final group with Jimmy Walker, closed with a 73 and tied for seventh. That gets him into the Northern Trust Open next week at Riviera. … Walker was the fourth Pebble Beach winner since 1994 to shoot 74 in the final round – Johnny Miller in 1994, Dustin Johnson in 2010, and Graeme McDowell in the 2010 U.S. Open… Canada’s Mike Weir and Brad Fritsch failed to make the 36 hole cut.