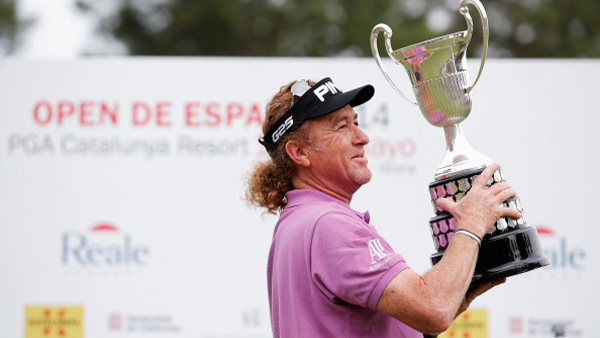 GIRONA, Spain – Miguel Angel Jimenez won the Spanish Open on Sunday after a three-way playoff to become the European Tour’s first winner over the age of 50.

Jimenez extended his own record as the oldest European Tour winner at 50 years and 133 days old.

“There is no secret,” Jimenez said. “Good food, good wine, good cigars and some exercise.”

Jimenez beat Thomas Pieters of Belgium and Australia’s Richard Green in a playoff after he was the only one to make par on the first extra hole. All three players finished on 4-under 284.

It was the Spaniard’s 21st European Tour win and his second of the season after he won at Hong Kong in December, also following a playoff, at the age of 49 years, 337 days.

Pieters led by two shots going into the final round at the PGA Catalunya Resort but only managed a 3-over 75 despite an eagle on No. 15. Jimenez shot a 73, while Green carded 72.

It was the first win for Jimenez at the tournament in 27 appearances.

“There’s no words to describe what it means to me, you need to be into my skin but I’m not going to let you,” joked Jimenez. “It’s amazing. I have been close a couple of times. Today it was very tough out there but I got it in the end.”