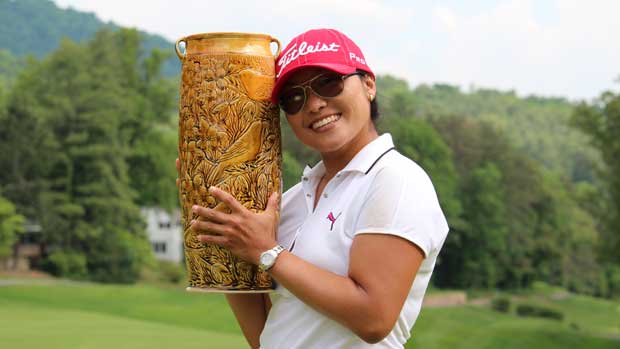 The victory capped a comeback from an allergy problem two years ago that attacked her immune system and made it difficult to breathe and walk on her own.

“I am speechless. That is how amazing this is,” said the 35-year-old Kang, who cried during her emotional victory speech. “I never thought I’d win again. That is why I am so overwhelmed. I can’t believe my name is at the top of the leaderboard.”

A two-time winner on the LPGA Tour, Kang shot 5-under 67 in all three rounds for a five-stroke victory at the Country Club of Asheville. The 11-year span between victories is the longest in tour history.

“This win just lets me know that I can really do this again and God gave me the talent and the health to do this,” Kang said. “This is just awesome.”

Kang is committed to the Symetra Tour in a bid to regain full LPGA Tour status. The final top 10 on the money list will earn 2016 LPGA Tour cards.

“This week, I withdrew from the LPGA event to come here and play,” Kang said. “I think this is a tour that can help me get (to the LPGA) and get stronger.”

Kang had only one bogey in the event, on her 14th hole in the first round.

Lacey Agnew, Brianna Do, Daniela Iacobelli and Brittany Benvenuto tied for second. Agnew closed with a 67, Do shot 68, Iacobelli 69, and Benvenuto 70.

The top Canadians were Samantha Richdale (70) and Muade Aimee LeBlanc. The pair tied for 8th at 8-under.