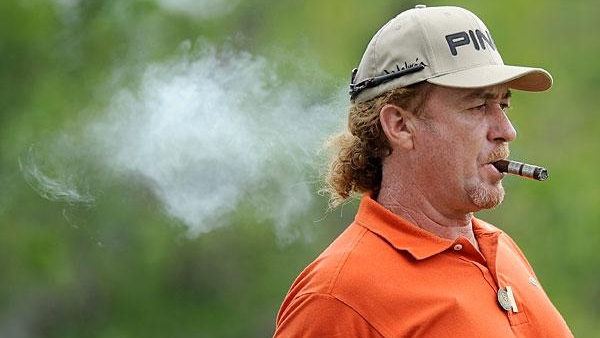 After one eagle, five birdies and a tournament record, Jimenez proclaimed “I love it!” and then departed in search of a couple of his usual staples.

So far, life is good for the Spaniard on the 50-and-over tour.

Avoiding a post-Masters letdown, Jimenez shot a 65 on Friday to lead the cold, soggy Greater Gwinnett Championship by three strokes.

“Now it’s time for a nice, warm shower, a nice fat cigar and a glass of Rioja. … I’m desperate to find one of my cigars and have a glass of wine.”

Jimenez, coming off a fourth-place finish in the Masters, was 6 under on his first nine holes, including an eagle on No. 18. He added another birdie on No. 2 and closed with seven straight pars at TPC Sugarloaf.

Bernhard Langer set the previous tournament record with a 66 while winning the 2013 inaugural championship.

Perry said he thought Jimenez might have a letdown after his strong finish in Augusta.

“It’s funny, you go from the PGA to the Champions, it’s so much more laid back and relaxed over here,” Perry said. “The atmosphere is different. I actually didn’t know what he’d do today. Honestly, I didn’t think he would shoot 65. I thought he’d be more the other way, after a fourth-place finish, it’d be a letdown this week.

The 65 came six days after Jimenez shot the low round of the Masters, a third-round 66.

Jimenez is focused on making the European Ryder Cup team and may have limited time on the Champions Tour this year. Perry, the 2013 player of the year, said Jimenez will be good for the tour.

“Yeah, we need guys like that out here,” Perry said. “I mean, he’s a huge fan favorite. He brings a lot of flair and class to golf and he just has a good time.”

Jimenez tried to sneak through the interview room as Perry was talking with reporters. Perry stopped to call out to Jimenez “Hope to see you tomorrow. Don’t beat us too bad, OK?”

After Jimenez mentioned wine and cigars in his reply, Perry laughed and said “That guy has too much fun.”

Asked if Jimenez might spark a Champions Tour trend with his well-known passions, Perry said: “If it works. If it’s not broke, don’t change it.”

Fred Couples shot a 69, including a double bogey on No. 9, his finishing hole. Jeff Sluman also shot a 69.

Though light rain began soon after the round began and became more intense in the afternoon, there was no delay.

“It was as cold and ugly as you can get,” Langer said. “It never stopped raining on us for two minutes.”

Jimenez said the weather was just a nuisance.

“It’s not easy because all day is wet,” Jimenez said. “Not hard rain but these little things coming and coming, sometimes quicker.”

Pate called his 68 “kind of unexpected” and a product of “smoke and mirrors.” He said he struggled more with the temperatures, which dropped to about 50 by the end of his round, than with the rain.

“At a certain point I just got cold and it was hard to move,” Pate said. “We’re old. We don’t like cold weather.

“This is really not my wheelhouse. I like it when it’s about 95 degrees and I’m sweating.”

Colin Montgomerie was part of a group of four at 70, which included Canada’s Rod Spittle.