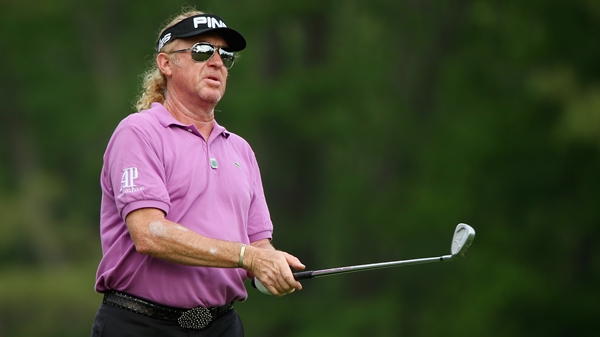 DULUTH, Ga. – Miguel Angel Jimenez, extending his impressive Champions Tour debut, shot 2-under 70 on Saturday to take a one-stroke lead over defending champion Bernhard Langer into the final round of the Greater Gwinnett Championship.

Jimenez and Langer were tied at 8 under entering the final hole. Jimenez reclaimed sole possession of the lead with a birdie. Langer missed putts for eagle and birdie before settling for par and his second straight 68.

Fred Couples, who shot 68, is in third place, two shots behind Jimenez.

Jimenez began the day with a three-stroke lead after his tournament-record 65 on Friday. He began his second round with a birdie, but he gave back three strokes on the next three holes.

Canada’s Rob Spittle dropped four spots into a tied for 11th heading into Sunday’s final round.

The St. Catharines, Ont. native carded a 1-under 71 Saturday. He’s 3-under for the tourney, six back of the lead.