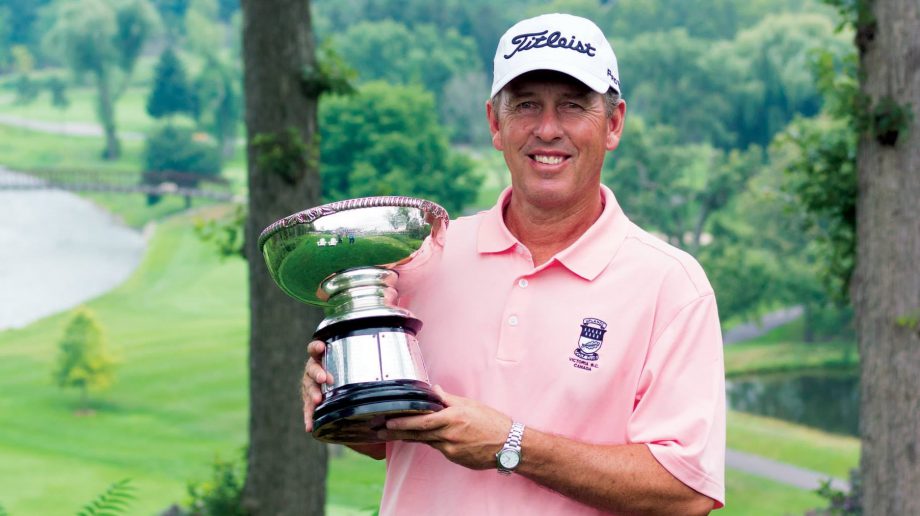 The 55-year-old Victoria, B.C., native put together rounds of 64-71-69 for a three-day total of 9-under-par. His 54-hole score was three shots better than David Wettflaufer and Ken Tarling, who both fired 6-under-par 65 final rounds.

For the first time all week Rutledge managed to get through Credit Valley’s tough opening five holes under par, which he says was the key to the day.

“The good thing was I got through the top side of the golf course at 1-under and that had been my issue really all week,” he said. “Once I got down into the valley I just kind of held my own out there and no one really managed to make a real charge at me . . . so I was thankful for that.”

Rutledge’s final round playing partners—Rod Spittle and Scott Allred—finished T4 at 4 under, while Keir Smith placed sixth at 2 under. Phil Jonas and Serge Thivierge were T7 at 1 under, with last year’s winner Remi Bouchard and this year’s Super Senior’s winner Daniel Talbot rounding out the top 10.

On Credit Valley’s back nine, Rutledge had some tree troubles on Nos. 13 and 14, but kept his round together with some nifty wedge work.

“I had some really good saves today after hitting some stray tee shots,” Rutledge said. “I made a good birdie on 13 after clipping the tree on my approach and then an even better par on 14 when I got a wild bounce into the trees off the tee.”

With his win Rutledge is halfway to Moe Norman’s record of eight PGA Seniors’ Championship of Canada wins. Rutledge says he’s well aware of Norman’s record, but also admits this week is about much more than winning.

“As long as I can keep healthy I’ll keep playing in this championship and keep chasing Moe,” he said. “But I’ve said it in the past and I’ll say it again: as much as it is about winning this week; it’s also about coming home, seeing some old buddies and having a bunch of laughs.”

The PGA Seniors’ Championship of Canada was first played in 1938 as a division of the Canadian PGA Championship. In 1973, the championship became an independent event and has stayed that way since.

Among the Canadian golf legends to win the PGA Seniors’ Championship of Canada are Stan Leonard, Moe Norman—who won a record seven straight years from 1979-1985—Bob Panasik, Al Balding—who wowed the golf world by winning at age 76 in 2000—and Jim Rutledge.