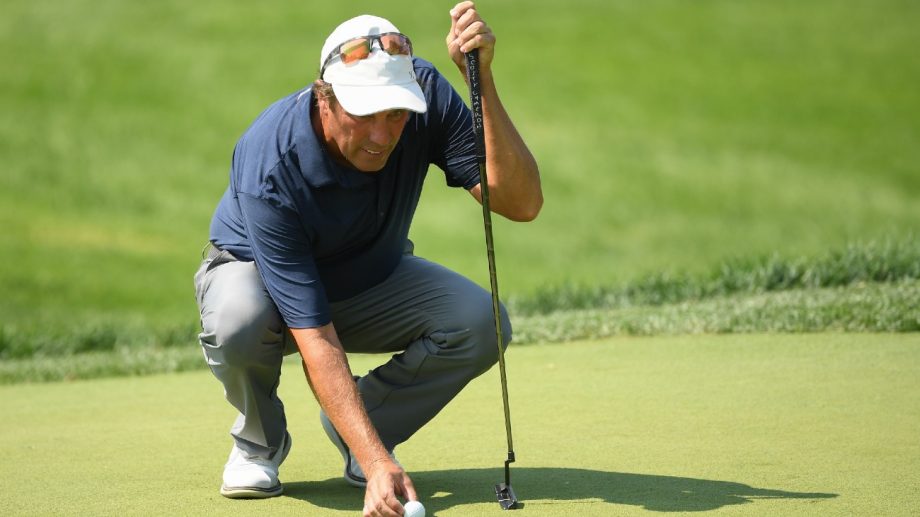 OMAHA, NEBRASKA - JULY 09: Stephen Ames of Canada lines up his putt on the 16th hole during the second round of the U.S. Senior Open Championship at the Omaha Country Club on July 09, 2021 in Omaha, Nebraska. (Photo by Quinn Harris/Getty Images)
Canadian Press

OMAHA, Neb. (AP) – The combination of wind, heat and humidity made it difficult to go low at the U.S. Senior Open on Friday.

Furyk shot a 6-under 64, the best round in days at Omaha Country Club, to take a two-stroke lead over Canada’s Stephen Ames. The 2003 U.S. Open champion and 17-time PGA Tour winner rebounded from an opening 72 to get to 4 under.

“I was able to see some putts go in, and I hit a lot of fairways, a lot of greens today, kept the ball in good places,” Furyk said. “When I missed it, I missed it in the right spots for the most part. Just really kind of got on a roll and got some momentum.”

First-round co-leader Ames, based out of Calgary, bogeyed four of the first six holes on his second nine and shot 73. Two-time U.S. Senior Open runner-up Miguel Angel Jimenez (71) was 1 under.

Kraft, who hadn’t played in a tournament since September 2019, had four straight birdies on his second nine and shot 65 for the best round of the afternoon session.

“You know, there’s such a long way to go, but I’m playing OK,” Haas said. “I don’t think I’m playing just amazingly golf that I can’t even fathom. I can play better, I think, but I have to do it. I feel good. Health, I love the heat. It keeps me loose.”

With thunderstorms in the forecast Saturday, the first tee times for the third round were moved up to 7:15 a.m. with threesomes going off Nos. 1 and 10.

Temperatures were in the low 70s when Furyk went out Friday morning, but wind swirled and was gusty. The wind calmed by the afternoon, but heat and humidity set in to create feel-like temperatures near 100, and the conditions coupled with the hills of OCC wore on the 50-and-over players.

Furyk hit 12 of 13 fairways and 15 of 18 greens in regulation and had three birdies on each side.

The turning point, he said, was making a 30-foot putt to save par after his tee shot landed in a greenside bunker on the 240-yard, par-3 third hole. Birdies on three of the next four holes got him under par for the tournament.

Furyk ended his round with a birdie on the par-4 18th. He hit a knocked-down 8-iron about 15 feet under the hole and made the putt to secure his lowest score in an official event since last September.

The 51-year-old Furyk has two victories and nine top-10s in 15 events since he joined PGA Tour Champions last year. He’s never been out of the top 25 as a senior. His highest finish in a senior major is sixth in the Senior Players Championship at Firestone two weeks ago.

Andrade followed a bogey-free 65 with a 75 that included six bogeys.

“I felt like I played better than 75, and I’m still in it,” Andrade said. “So just go prepare for tomorrow and go out and hit some drives in the fairway and see if we can make a few birdies.”