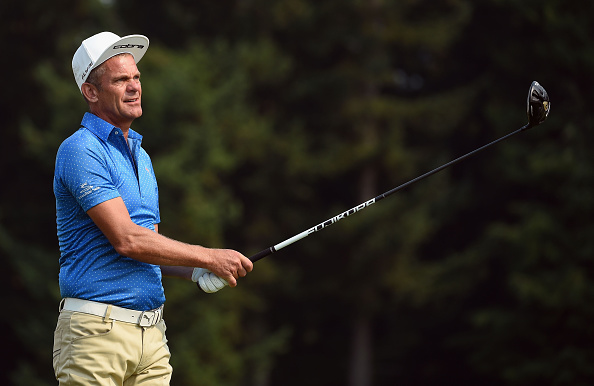 PEBBLE BEACH, Calif. – Jesper Parnevik birdied three of his last four holes Friday at Poppy Hills for a share of the lead with Tom Byrum in the Champions Tour’s First Tee Open.

Parnevik had six birdies and one bogey. The 50-year-old Swede is winless in 12 starts on the 50-and-over tour after winning five times on the PGA Tour.

The 54-year-old Byrum had five birdies in a bogey-free round. He was second last year, a stroke behind John Cook, and is winless in 62 career senior starts.

Mark McNulty was third at 4 under after a 68 at Pebble Beach, the site of the final round.

Colin Montgomerie, Sandy Lyle and Woody Austin shot 68 at Poppy Hills to reach 3 under. Montgomerie is coming off a victory two weeks ago in England in a European Senior Tour event.

Jeff Maggert opened with a 74 at Poppy Hills. He leads the tour with four victories – winning three of his last six starts – and tops the Charles Schwab Cup standings.

Davis Love III had a 75 at Poppy Hills. He won the PGA Tour’s Wyndham Championship last month to become the third-oldest champion in tour history at 51 years, 4 months, 10 days.