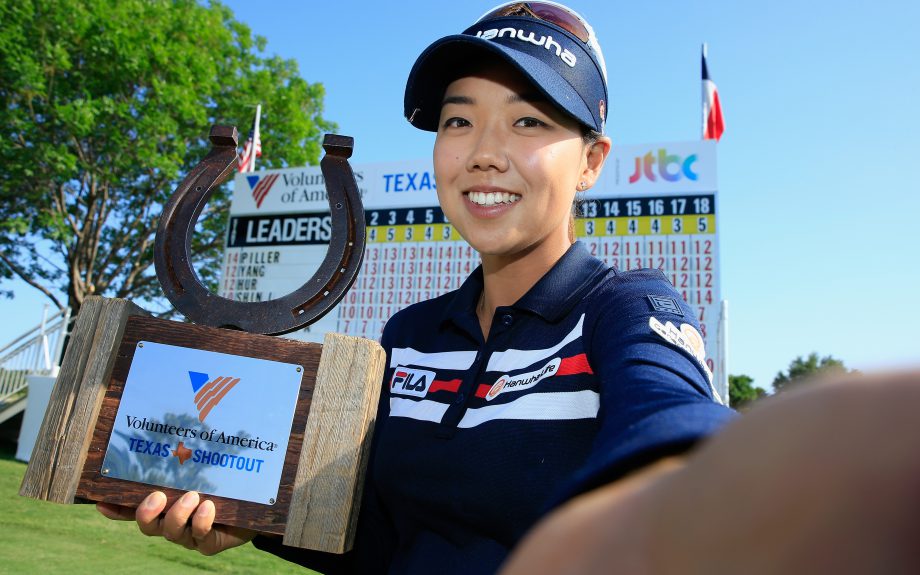 IRVING, Texas – Jenny Shin won the Volunteers of America Texas Shootout on Sunday for her first LPGA Tour victory, pulling away for a two-stroke victory at Las Colinas.

“Still in awe. Nothing has registered yet,” Shin said. “I wanted to talk to my mum, but I was on the verge of tears, so I hung up without really her answering the phone. I think it will hit me as soon as I talk to my mum.”

“I was proud of the way I finished. I’ll be back,” Piller said after her fourth straight top-six finish.

Shin birdied three of the first five holes and added another on the par-5 10th. She closed with eight pars, the last an up-and-down save from right of the green on the par-5 18th.

“I actually didn’t know I was in front of everybody, I thought Amy Yang was only one stroke behind, so I was really nervous on the last hole,” Shin said.

Other players showered her with beer after the victory.

“It wasn’t something I pictured, for sure,” Shin said. “I wanted something like champagne, but now I’m stinking of beer. Then they were like, ‘Oh, you stink of beer.” Then they shower you more with water. But it’s still good. I’m so glad they stuck around and gave me a shower of beer.“

She’s projected to jump from 38th to 24th in the world ranking.

“Nothing’s easy, golf is not easy,” Shin said. “I worked my butt off out there. I didn’t have my ‘A’ game this week, surprisingly, and to know that I won with kind of a semi-goodish game, it makes me very happy.”

Piller lives in Plano, about 20 miles from Las Colinas. The long-hitting U.S. Solheim Cup hero grew up in Roswell, New Mexico, and played at the University Texas-El Paso. A number of high school and college friends joined her family _ led by her husband, PGA Tour player Martin Piller _ in the gallery.

“The thing that makes it more special is I don’t have to play good golf for them to continue to love me, so that’s pretty cool,” Piller said. “No matter what I shoot, no matter what I do, they’re behind me.”

Fifth-ranked Brooke Henderson closed with a 71 to tie for 19th at 3 under, ending the 18-year-old Canadian’s string of top-10 finishes at eight.

Cheyenne Knight, a 19-year-old University of Alabama freshman from nearby Aledo, had a 72 to tie for 30th at 1 under. Karah Sanford, a 14-year-old high school freshman from San Diego, tied for 51st at 6 over after a 77.