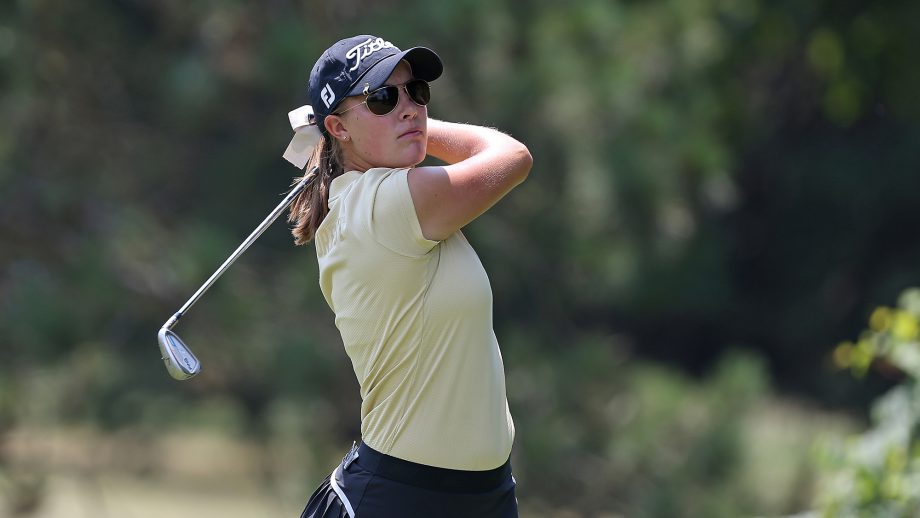 AUGUSTA, Ga. – Jennifer Kupcho took care of the preliminaries in the Augusta National Women’s Amateur and now has a shot at a title that never seemed likely: A chance to become the first woman to win at the home of the Masters.

Her only regret was that her one-shot lead was not bigger.

Kupcho, the 2017 Canadian Women’s Amateur Champion, battled her swing down the stretch on a blustery Thursday at Champions Retreat and held on for a 1-under 71, giving her a one-shot lead over Maria Fassi of Mexico, who had a 70.

The final round is Saturday at Augusta National, the first time women have competed on one of the most famous golf courses in the world.

“It’s going to be a tight race all the way to the finish,” Kupcho said.

Seo-yun Kwon of South Korea was 10 shots behind and just as excited.

The 72-player field was cut to 30 players for the final round, and Kwon flubbed two chips for double bogey on the 16th hole to seemingly lose her chance. But she saved par from a bunker on the 17th with a 10-foot putt, saw a leaderboard and knew only an eagle would suffice on the par-5 closing hole.

Her 4-hybrid came up a little short, 10 yards away.

“I said, ‘Let’s chip this in,”’ said Dave Thorpe, an Augusta National caddie working for Kwon this week. “I don’t know if she understood me or not, but she did it.”

That put her in an 11-way playoff for the last 10 spots to get the field to 30 players. Kwon was among nine players who made par on the first extra hole, all of them advancing when Alessia Nobilio of Italy and Ainhoa Olarra of Spain made bogey.

Brigitte Thibault of Rosemere, Que., missed the cut. She was the lone Canadian in the field.

On the second playoff hole, Olarra made a 25-foot birdie putt to get the last spot.

Augusta National announced its Women’s Amateur last year at the Masters, creating an opportunity for some of the best amateurs in the world to showcase their skills on a course where Jack Nicklaus, Arnold Palmer and Tiger Woods have created so many big moments.

Women have played Augusta National for years, though it was not until 2012 that the club had its first female members. Kupcho is among several players in the field who have played as guests, usually with their college teams.

Friday will be a practice round at Augusta National, even for the 42 players who missed the cut.

Kupcho, who started on No. 10, was 3 under for the round through 10 holes and poised to stretch it even more when she missed a short birdie putt on the next hole.

“Lost my confidence a little bit,” she said.

The Wake Forest senior made her first bogey of the tournament with a 4-foot putt that rimmed out on No. 5, and she started to fight her swing. She narrowly cleared the rock-framed creek on the par-3 eighth and chipped poorly for another bogey, and she had to make a 4-footer on the par-4 ninth to avoid another dropped shot.

No matter. She was at 5-under 139 and plays in the final group with Fassi, one of the longer hitters in the field.

Fassi, the top college player among women last year as a junior at Arkansas, was dynamic as ever with five birdies and an eagle to offset plenty of mistakes. She was five shots behind toward the end of the round when she used her power to set up easy birdies on the reachable par-4 seventh and the par-5 ninth.

“I knew I had to post an under-par score to be in contention for Saturday, and it was just exciting to see that I made so many birdies,” she said.

Kupcho has played before big crowds at the U.S. Women’s Open.

Saturday figures to be a new experience, on the fairways and greens of Augusta National on the weekend before the Masters, with thousands of fans able to see the course for the first time all year through separate tickets they were able to buy through a lottery.

NBC Sports is televising the final round. The Augusta National Women’s Amateur has its own logo and even its own theme music for the broadcast.

Kupcho hopes the rest of it will look familiar.