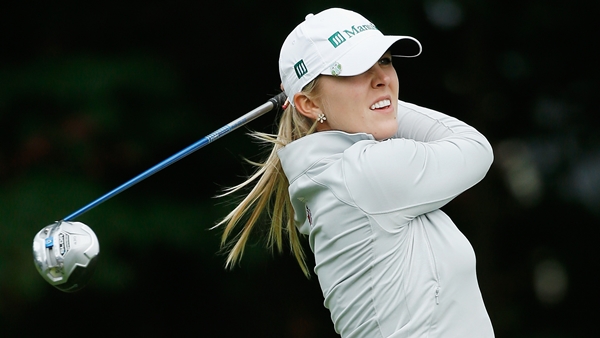 PITTSFORD, N.Y. – Tall and fit with all those Instagram photos to prove it, long-hitting Lexi Thompson figured she might have an edge on the LPGA Championship’s new course.

Thompson and South Korea’s Meena Lee shot 6-under-66 on Thursday to share the first-round lead in the LPGA Tour’s fourth major championship of the season.

“It’s all about confidence,” Thompson said. “You just have to go into every shot just telling yourself you’re going to pull it off.”

Thompson, the Kraft Nabisco winner in April for her first major title, and Lee each made eight birdies and a pair of bogeys at Monroe Golf Club to finish a stroke ahead of ahead of Brittany Lincicome, Colombia’s Lisa McCloskey and Canadian rookie Jennifer Kirby of Paris, Ont.

Shanshan Feng of China, the tournament winner two years ago, was tied for sixth at 68 with 2010 champion Cristie Kerr.

Catriona Matthew of Scotland, runner-up a year ago to South Korea’s Inbee Park, was tied at 69 with seven other players. Park was at even-par 72, one shot better than Paula Creamer and Karrie Webb.

Top-ranked Stacy Lewis, a three-time winner this year, started on the back nine and birdied three of the first five holes, then faltered with three straight bogeys before the turn. She finished at 71.

Locust Hill had been LPGA’s host in the Rochester area for 37 straight years before the tour made the switch this year to nearby Monroe and moved the date from June to August. The Donald Ross-designed course is about 300 yards longer at 6,717 yards and does not have a single water hazard, but it does feature 106 bunkers, more than double the number at Locust Hill, and they’re deeper.

The par 3s are longer, too, at 183, 193 and 207 yards, but the wider fairways favor long hitters like Thompson, who led the LPGA coming in with an average of 271.2 yards off the tee. A course made soft by recent rain only made that edge even larger, as did a stiff wind.

“I would say it (driving) was an advantage,” said the 6-foot-1 Thompson, who had slumped in her previous four outings, missing one cut. “You just have to hit it straight. Doesn’t matter what club you’re hitting.”

Not a problem on a cool, cloudy, breezy day as the LPGA marks the end of its long run in the Rochester area. Thompson used driver on 14 holes and birdied all four par 5s. And she was accurate, hitting 10 of 14 fairways and reaching 16 of 18 greens in regulation. Consecutive three-putt bogeys on the back side were the only blemishes on a round that reached 7 under with a birdie on the par-5 14th hole.

Lincicome, whose best finish this year is a tie for 10th at the Airbus LPGA Classic in Alabama in May, had eight birdies and three bogeys and avoided any three-putt greens.

“I think, take today and just build,” Lincicome said. “I feel like I’ve been playing well. I’ve been doing a lot of really good things. It’s just not all coming together. I was hitting things to like a foot and just tapping them in. It was stress-free.”

A year ago, Park survived the stress of a playoff to beat Matthew and start a three-tournament winning streak that also included victories in the Walmart NW Arkansas Championship and U.S. Women’s Open, her third straight major win of the season. She began defense of her title with a round that included just two birdies to go with two bogeys.

U.S. players have won the first three majors this year. Besides Thompson’s triumph in the Kraft Nabisco, Michelle Wie won the U.S. Women’s Open and Mo Martin surged to victory in the final round at the Women’s British Open.

The last time the first three majors in the LPGA were won by American players was in 1999, and not since 1992 have Americans won them all. A fifth major, the Evian Championship in France, was added last year.

Wie is not playing this tournament because of an injury to her right index finger, while Martin had to cope with a sore thumb and shot a 72 that included four birdies and four bogeys.

“I’m happy with it,” Martin said. “It was the first time I hit a lot of shots out there, so just learning how this course reacts, where to land my shots and where the prevailing winds are.”

Rookie Emma Jandel, who made the field when Wie withdrew, shot a 69.

“It’s a little different having cameras in your face, so I’m just kind of learning to put it all together,” said Jandel, who found out Monday morning she was playing. “I know I got the game.”