Jennifer Kirby: Aiming to get back on track 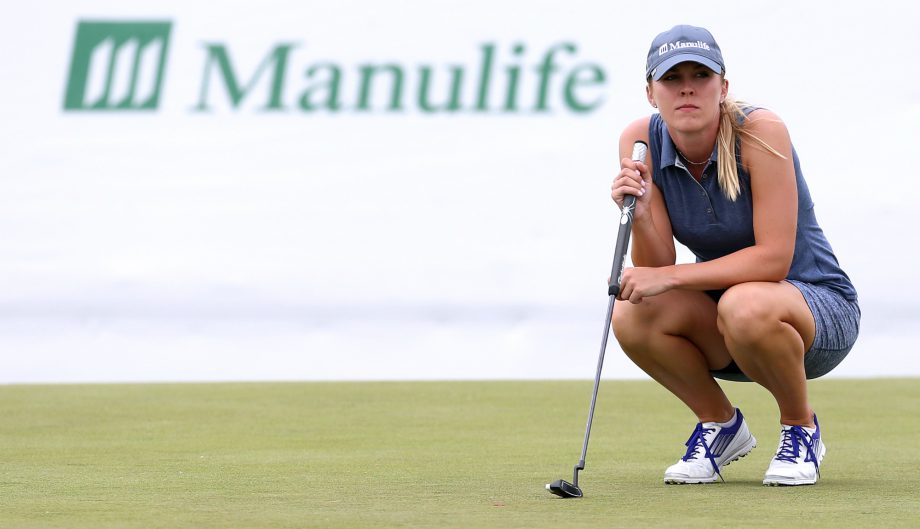 It is often said that the journey to success is not a sprint, but rather it’s a marathon—and that seems to resonate with fourth year pro, Jennifer Kirby.

After leading the University of Alabama Crimson Tide to a national title in 2012, the Paris, Ont. golfer secured her LPGA Tour card on her first attempt the following year in December of 2013.

“I started out pretty fast. I never really expected to get my LPGA Tour card right out of college,” she said recently in an interview during a media event promoting the upcoming Manulife LPGA Classic—which runs from June 7-11 at the Whistle Bear Golf Club in Cambridge, Ont.

“It was great to be able to make it that first year and I learned so much playing on Tour,” added the former amateur standout and Team Canada graduate.

However, thus far in her first four years as a professional, the former Canadian National Amateur Squad member has struggled to find the consistency that she was known for during her stellar amateur career.

Currently, Kirby is competing in her second year on the Symetra Tour; and remains firmly committed to the goal of returning to the LPGA Tour.

While her game is not where she would like it to be at this point, the 26-year-old says she’s been working overtime to change that.

“I practiced really hard this off-season and I’m really committed to improving my game,” said Kirby who adds that she’s recently been working on fine tuning her swing.

“I haven’t seen the results that I would like to thus far but it’s a long season. There are 23 events in the season; and in some ways it’s like a marathon out there, and it’s still early.  But I’m happy that I’m seeing a lot of positives in my game,” noted the Crimson Tide alum.

While she’s pacing herself for the long haul, Kirby—a Manulife brand ambassador who will receive a sponsor exception to the upcoming Manulife LPGA Classic—says she will have a nice adrenaline rush from competing at home.

“I’m very excited about being able to play at home in front of the Canadian fans. I grew up in Paris, Ontario which is really close to here, so it’ll be great to have a lot of friends and family members out here supporting me,” she said.

While the tournament is still searching for a new title sponsor for next year, Kirby is quick to point out the benefits brought on from the Manulife LPGA Classic over the past five years.

“Just having the tournament and having the world’s best compete here has brought a lot of excitement and a lot of attention to the game in the area and beyond. It’s great to see the little kids coming and getting that exposure to the game from such a young age,” she said.

“The tournament has done a lot of grow the game; and obviously I’m hoping that it continues on for a long time.”

In addition, Kirby acknowledges the success of Canadians competing on the LPGA Tour has also done a lot to bring attention to the sport and help it grow.

“Obviously, the success of Brooke (Henderson) and some of the other Canadians on the LPGA has inspired many young girls in the country to pick up the sport—which is great,” Kirby noted.

Motivated by the success of her peers and her home coming of sorts in a couple of weeks, the 2009 Canadian Women’s Amateur champion believes there’s no better time to step up her game.

“I really believe I’m capable of competing against these girls and having the opportunity to play at home in front of a supportive crowd is definitely going to provide me with that extra motivation,” she said with a smile.

While she’s looking to put in a strong performance at the upcoming Manulife LPGA Classic, the second year Symetra Tour golfer is also focused on putting up consistent results the remainder of the season in order to regain her status on the LPGA Tour.

Kirby is confident that her hard work is about to pay off; and says her best golf is just around the corner.

“I’m aiming for a bunch of top ten finishes for the rest of the season; but the goal is to win out there and winning multiple times would be better…If you win once on the Symetra Tour, then you are pretty much guaranteed a top-10 finish on the money list and status on the LPGA next year,” said the former amateur standout.

“I’ve been working really hard but I just haven’t had that really hot round yet—but I feel that I’m really close to getting back on track.”