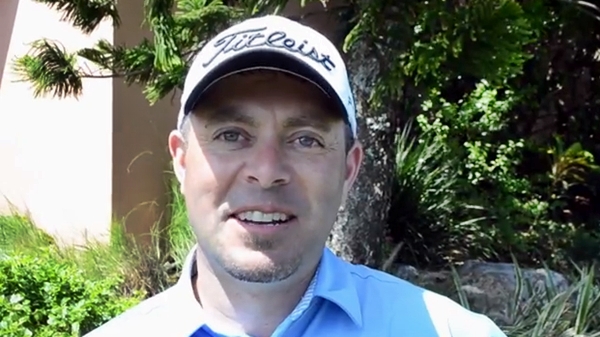 BIRMINGHAM, Ala. – The 18-round battle between Jeff Maggert and Kevin Sutherland ended with dueling putts in a sudden downpour.

Round 18 went to Maggert.

He birdied the final two holes for a 4-under 68 and sole possession of the lead Saturday after the third round of the Champions Tour’s Regions Tradition. Finishing in heavy rain, Maggert reached 14 under after entering the day tied for the top spot with Sutherland at Shoal Creek. Sutherland was left a stroke back when his birdie attempt on No. 18 was short by a couple of inches to set up a tap-in for a 69 under the driving rain.

Both had huddled under umbrellas with their caddies on the suddenly wet green.

“That green, I think, slowed up a little bit,” Maggert said. “Kevin had a really good putt and it just rolled up a little bit short of the hole. If the water hadn’t been on the green, he probably would have made that one. Mine just ran out of gas right on the front in and dropped in.”

Sutherland was alone at the top until a bogey on No. 16 brought him even with Maggert, who had a bogey-free round. Both birdied No. 17.

It’s the lowest 54-hole total in the tournament since Brad Bryant entered the final round at 15-under.

Fred Funk was third at 18 under after a 67. He won the tournament in 2008 and 2010 and nearly closed the gap further on No. 18, grimacing after a near-miss for birdie. Only Jack Nicklaus has won the Tradition more than twice, winning four times.

Maggert is seeking his second win on the Champions Tour. No second-round leader has won the Tradition since Tom Watson in 2003.

He hit a 90-yard wedge shot to a foot on 17. For the second straight day, he set up a birdie from the fairway bunker on 18, this time making about a 12-footer.

“I made some nice par-saving putts,” Maggert said. “I didn’t make a lot of birdies until the end. I was just trying to hang around, be patient. Kevin had a 1-2 shot lead on me most of the day and I just didn’t want him to run away from me too far. “

Seeking his first win on the 50-and-over tour, Sutherland was even-par through seven holes before starting rolling with back-to-back long birdie putts – about 20 feet on No. 8 and 45 feet on the next hole. He had a run of three birdies in four holes starting on No. 8 and wasn’t sweating the ever-so-close last putt.

“I’m not going to lose any sleep over it,” Sutherland said. “It would have been nice to hit it a little bit harder.”

His best Champions Tour finish was a second-place tie at Mississippi in March.

Jeff Hart and Gene Sauers both had 68s to finish five strokes back. Bernhard Langer (70), Tom Pernice Jr. (68) and defending champion Kenny Perry (70) are 7 under.

Funk had three birdies in a four-hole stretch on the first nine holes and birdied three of five holes during another hot streak.

He had been slumping with finishes of 38th, 30th and 59th in his last three Champions Tour tournaments after missing two-plus months starting in February with tendinitis in his left elbow. Funk said he spent about $20,000 on what he described as a magnetic pulse machine that helped speed his return.

“It’s already paid for itself just by getting out here,” he said.

“It is exciting and fun to be back in contention,” Funk said. “I hated watching these guys on TV because I wanted to be out here, and I watched every one of them.”

John Huston, who was sidelined for nearly 18 months with a nerve disorder in his neck, shot a bogey-free 65. He was tied for 10th at 5 under.