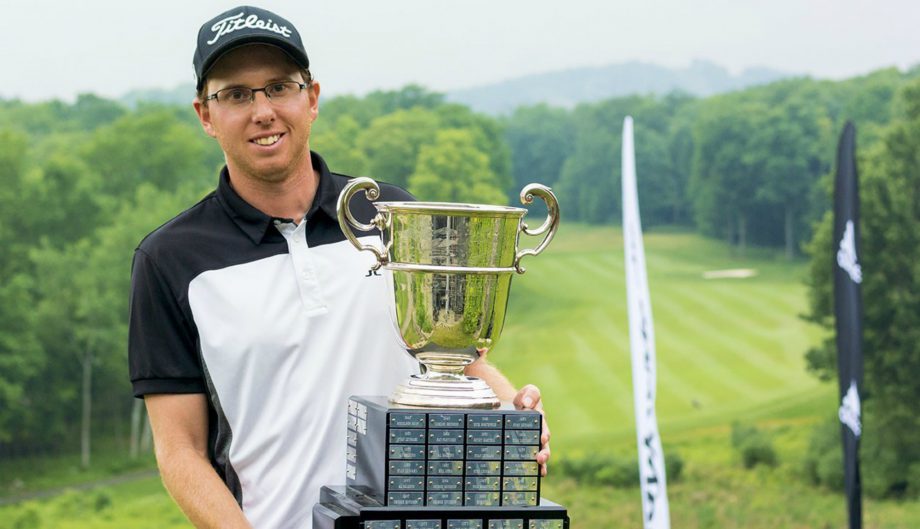 Jean-Philip Cornellier won’t soon be forgetting his first win as a professional.

The 26-year-old from the Club de Golf Knowlton captured the PGA Championship of Canada sponsored by Mr. Lube and presented by TaylorMade-adidas in dramatic fashion Thursday afternoon at Deer Ridge Golf Club.

Cornellier outduelled Bryn Parry of the Point Grey Golf & Country Club, sinking a 15-foot birdie putt on No. 18, to win 2-up.

“This is just a great feeling to have my first win as a professional come at the PGA Championship of Canada,” Cornellier said. “It means a lot to me to have my name on the same trophy as so many legends.”

Cornellier came out guns blazing in the championship match, making six birdies thru nine holes and found himself 6-up over the 2013 PGA Championship of Canada winner with just eight to play.

“I was just in an amazing zone and the hole looked like the size of a basketball hoop,” Cornellier admitted.

However by the time the 16th hole rolled around, not only had his confidence evaporated, his monster-size lead had as well. A combination of four-straight bogeys and a Parry birdie on the 15th saw Cornellier’s lead shrink to just 1-up with three to play.

“Once I got it to just three down, I just told myself to hit good shots and see if I could put some pressure on him, make him nervous and find out if he could hold on for the win,” Parry said.

“After a while, I started thinking, ‘what is happening out here? Is this really happening?’” Cornellier admitted. “But I just had to say to myself  ‘stay calm, you’re still leading this match and put the ball in play.’”

Both players halved holes 16 and 17 with pars before reaching the Deer Ridge’s final hole, the tree-lined 510-yard par 5 18th.

After pitching out from the right trees into the fairway, Cornellier found himself with 154-yards to the pin. He took a bold line with his 9-iron, hitting his approach to 15-feet.

After Parry failed to get up-and-down for birdie from behind the green, Cornellier calmly rolled his putt into the cup, securing the victory with a 2-up score.

“That was a nice finishing birdie and a cool way to win,” Parry said.

With the championship win, Cornellier takes home the historic P.D. Ross Trophy and the first place prize of $15,000.

However, at the end of the day, there was a silver lining for Parry as well.

By virtue of his stellar play this week at Deer Ridge, Parry will jump to the top of the player rankings when they’re released Friday and earn the PGA of Canada exemption into the RBC Canadian Open.

The next PGA national championship takes place this August at Burlington Golf & Country Club for the Mr. Lube PGA Seniors’ Championship of Canada.