Jay Vandeventer fires 64 to lead at The Great Waterway Classic 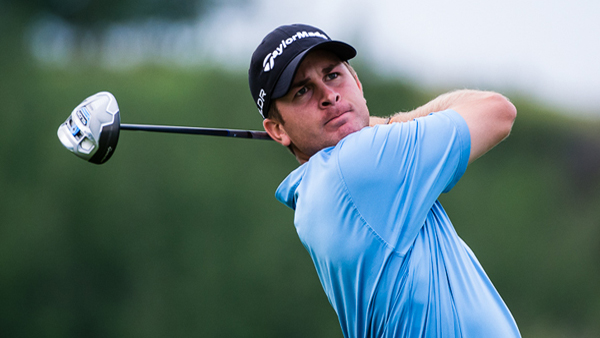 (Bath, ON) – Briston, Tennessee’s Jay Vandeventer shot an 8-under 64 on Thursday at Loyalist Golf Club to take the first round lead at The Great Waterway Classic. The 23-year old led by one over a group of players that included Baddeck, Nova Scotia’s Peter Campbell, Austin, Texas’ Creighton Honeck, Aberdeen, Scotland’s Paul Cormack and Santee, California’s Daniel Miernicki.

Vandeventer, a University of Tennessee graduate, carded six birdies and an eagle on the day, and credited a hot putter for his round, the best of his first season on PGA TOUR Canada.

“I finally got the putter rolling early, which was a change from the last couple of events,” said Vandeventer, who has three top-25 finishes in his first PGA TOUR Canada season, with his best finish a tie for 18th at the Syncrude Boreal Open presented by AECON. “I’ve been hitting it pretty well. I’ve just been lacking some putts to fall.”

The round was nearly one stroke better, with 10-footer for eagle at 18 suffering a hard lip-out. Vandeventer settled for birdie, his second straight to finish off his round, and said he was pleased with his start and prospects for the rest of the tournament.

“I had a pretty good read on it and actually hit a really good putt,” said Vandeventer of the 10-footer for eagle. “It was dead centre right there just about a foot out and just broke, but I was really happy with the birdie. I made a bunch of pars on the back nine, so to birdie 17 and 18 feels pretty good.”

“This is a good round today, but I have three more, hopefully. I just want to keep that putter hot and keep my composure and go on from there,” added the PGA TOUR Canada rookie.”

One shot back of the group at 7-under were eight players, including Canadians Max Gilbert of St. Georges, Quebec and Ted Brown of Peterborough, Ontario.

CAMPBELL CONTINUES SOLID PLAY WITH 65
Coming off his best career PGA TOUR Canada finish with a tie for second at the Forces & Families Open, Baddeck, Nova Scotia’s Peter Campbell kept the solid play going on Thursday with a 7-under 65 to sit tied for second.

“I’m just trying to keep the momentum going. The putter’s still rolling good, and that makes a huge difference,” said the 31-year old, who added that he feels re-charged for the season’s final four events after a week off at his residence in Windermere, Florida. “It was good to go home, chill out a little bit and spend some time with my little girl and my wife.”

Campbell, who currently sits 31st on the Order of Merit, also ranks 23rd on the NEC Series – PGA TOUR Latinoamérica Order of Merit, and is looking forward to the opportunity to earn status on the Web.com Tour on both Tours.

“That’s the goal,” Campbell said. “I think I’m in a decent position to move up that money. I’m in a good position here, and I’ve got a chance in Latin America if this doesn’t work out, so I’ve got two shots at it.”

MIERNICKI RIDES HOT PUTTER AFTER TIME OFF
California Qualifying Tournament medalist Daniel Miernicki hasn’t played on PGA TOUR Canada since a fourth place finish at the Staal Foundation Open presented by Tbaytel, partially due to a nagging wrist injury. He showed no signs of rust on Thursday, though, firing a 7-under 65 to share second place after day one.

“I had nine putts on the front, so I pretty much made everything. It was a good way to get out of the gate,” said Miernicki. “I finished up well birdieing my last two so that felt good.”

Miernicki Monday Qualified for the Stonebrae Classic on the Web.com Tour earlier this month, but withdrew to tend to his wrist. With a clean bill of health on Thursday, the 24-year old said he’s excited about his chances for this week.

“I was a little rusty – I haven’t been playing that much, especially with my ballstriking, but I putted awesome, so if that comes around hopefully I’ll have a chance come the weekend.”

Peter Campbell is the leading Canadian , he’s  tied for second. Ted Brown and Max Gilbert are tied for sixth.