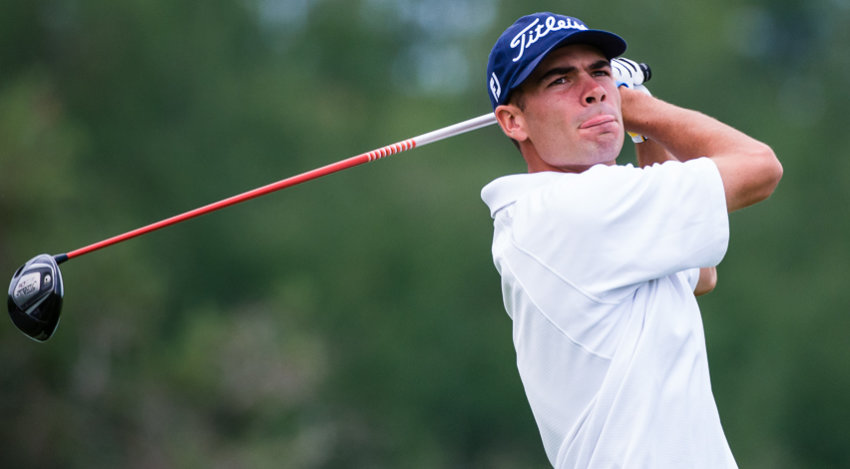 Vancouver, B.C. – San Jose, California’s Jay Myers shot a 4-under 68 on Saturday at Point Grey Golf and Country Club to take a one stroke lead over four players heading into the final round of the PC Financial Open, the first event of the 2015 Mackenzie Tour – PGA TOUR Canada season.

Myers, a 24-year year old in his second year on the Mackenzie Tour, carded four straight birdies on his back nine to reach 10-under par, one shot clear of Vancouver-area natives Adam Svensson and Bryn Parry along with Americans Drew Weaver and Ty Dunlap through 54 holes.

“My goal was to get to double digits and I thought that would get me in a good spot going into Sunday. I’m ready to go tomorrow and can’t wait to get out there,” said Myers, who will take his first 54-hole lead on the Mackenzie Tour into the final round.

Starting the day six shots off the lead, Myers began his round slowly but steadily made his way up the leaderboard as Parry, the 54-hole leader, fell to a 3-over 75. A teammate of Mackenzie Tour alumnus and current PGA TOUR member Mark Hubbard at San Jose State, Myers said he was excited to get in the hunt for Sunday and would relish the opportunity to be chased as the leader.

“This is why we play,” said Myers. “It’s a lot of fun to be in these positions and grinding and hitting good shots under the gun. Tomorrow’s going to be a lot of fun no matter what happens.”

Svensson, a member of Golf Canada’s Young Pro Squad making his first Mackenzie Tour start since turning professional earlier this spring, carded a bogey-free 68 to share second place through three rounds and give himself a chance to win heading into the final round.

“I expect to shoot a pretty low number,” said Svensson of his expectations after making a slight grip change with his putter before Saturday’s round of 68. “I’ve got a lot of confidence in my putting now, and I’ve always said if I putt pretty well I’ll usually have a good finish.”

Parry’s 3-over 75 left the North Vancouver native, who currently ranks No. 3 in the PGA of Canada Player Rankings, one off the lead, but the 43-year old said he was still upbeat heading into the final round on Sunday.

“If you look at it holistically it’s totally fine,” said Parry, who played full time on the Web.com Tour in 2007 and posted one runner-up finish. “It’s disappointing on a one-day sample size, but I think as well as I’ve played in Vancouver I’m pretty competitive so I like to push myself. We’ll go get a good night’s rest and see if we can be competitive tomorrow.”