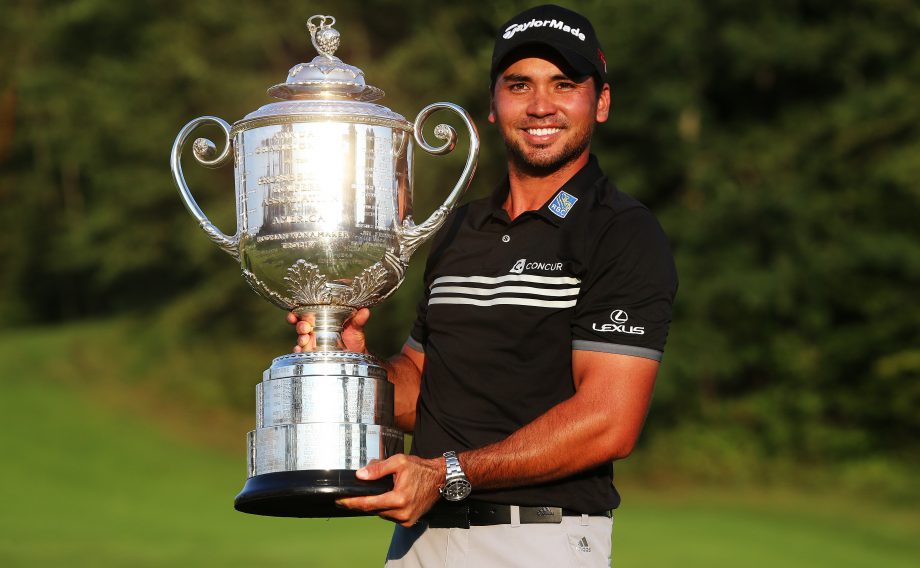 Jason Day poses with the Wanamaker trophy after winning the 2015 PGA Championship with a score of 20-under par at Whistling Straits. (Andrew Redington/Getty Images)

SHEBOYGAN, Wis. – Given a third straight chance to finally win a major, Jason Day promised a fight to the finish in the PGA Championship.

Turns out the biggest fight was to hold back the tears.

Worried that this year might turn out to be a major failure, Day never gave Jordan Spieth or anyone else a chance Sunday. He delivered a record-setting performance at Whistling Straits that brought him a major championship he started to wonder might never happen.

Day was in tears before he even tapped in for par and a 5-under 67 for a three-shot victory. He sobbed on the shoulder of Colin Swatton, his caddie and longtime coach who rescued Day as a 12-year-old struggling to overcome the death of his father.

And then came high praise from Spieth in the scoring trailer when golf’s new No. 1 player told him, “There’s nothing I could do.”

“I didn’t expect I was going to cry,” Day said. “A lot of emotion has come out because I’ve been so close so many times and fallen short. To be able to play the way I did today, especially with Jordan in my group, I could tell that he was the favorite. Just to be able to finish the way I did was amazing.”

Three shots ahead with three holes to play on a course with trouble everywhere, Day blasted a drive down the fairway on the par-5 16th and hit a towering 4-iron into 20 feet. He bit his lower lip, swatted his caddie on the arm, knowing his work was almost done.

The two-putt birdie put him at 20-under par, and two closing pars gave him the record to par in majors, breaking by one shot the 19 under of Tiger Woods at St. Andrews in the 2000 British Open. Day finished at 20-under 268, not knowing until it was over that it was a record.

What really mattered was that shiny Wanamker Trophy at his side.

He shared the 54-hole lead at the U.S. Open and the British Open and had to watch someone else celebrate.

“Not being able to finish, it would have been tough for me mentally to really kind of come back from that,” Day said. “Even though I feel like I’m a positive person, I think that in the back of my mind something would have triggered and I would have gone, `Maybe I can’t really finish it off.’

“It felt like I was mentally and physically grinding it out as hard as I could,” he said. “I wasn’t going to stop fighting until it over.”

Spieth gave it his best shot, but even the Masters and U.S. Open champion could tell what he was up against the way the 27-year-old Australian powered one drive after another and didn’t let anyone closer than the two-shot lead with which he started the final round.

“He played like he’d won seven or eight majors,” Spieth said. “He took it back. He wailed it. It was a stripe show.”

Spieth has the greatest consolation possible. With his runner-up finish, he replaced Rory McIlroy at No. 1 in the world.

“This is as easy a loss as I’ve ever had because I felt that I not only couldn’t do much about it as the round went on, I also accomplished one of my lifelong goals in the sport of golf. That will never be taken away from me now. I’ll always be a No. 1 player in the world.”

Spieth set a record of his own. By closing with a 68, he set a record by playing the four majors in 54-under par, breaking by one the mark that Woods set in 2000. The difference is that Woods won two majors by a combined 23 shots.

That also speaks to the depth of golf in this generation, and Day is the latest example. He moved to No. 3 in the world, meaning the top four in the world are all under 27 and have combined to win five of the last six majors.

“As long as I am healthy, I feel like I’m going to be there a long time,” Day said. “I still want to accomplish that No. 1 goal of mine, which is to be the best player in the world. I’m still motivated and still very hungry for that, even after this win.”

Branden Grace of South Africa had another mistake on the back nine in a major that cost him. Grace was tied for the lead at the U.S. Open when he hit his tee shot on the railroad tracks and out-of-bounds at Chambers Bay. This time, he was two shots behind when he went long of the 10th green and made double bogey. He closed with a 69 and finished third, five shots behind.

Justin Rose got within two shots until making a double bogey for the third straight day. He closed with a 70 and finished fourth.

Day faced enormous pressure of having a lead for the first time going into the final round, trying to avoid becoming the first player since the PGA Championship went to stroke play in 1958 to have at least a share of the 54-hole lead in three straight majors without winning.

It sure didn’t show, even if he felt it every step of the way.

“I knew today was going to be tough, but I didn’t realize how tough it was going to be,” Day said. “I learned a lot about myself, being able to finish the way I did. The experiences that I’ve had in the past with previous major finishes has definitely helped me prepare myself for a moment like this.”

Canadian Nick Taylor moved up the leaderboard to T68 after a round of 1-under 71 on Sunday.