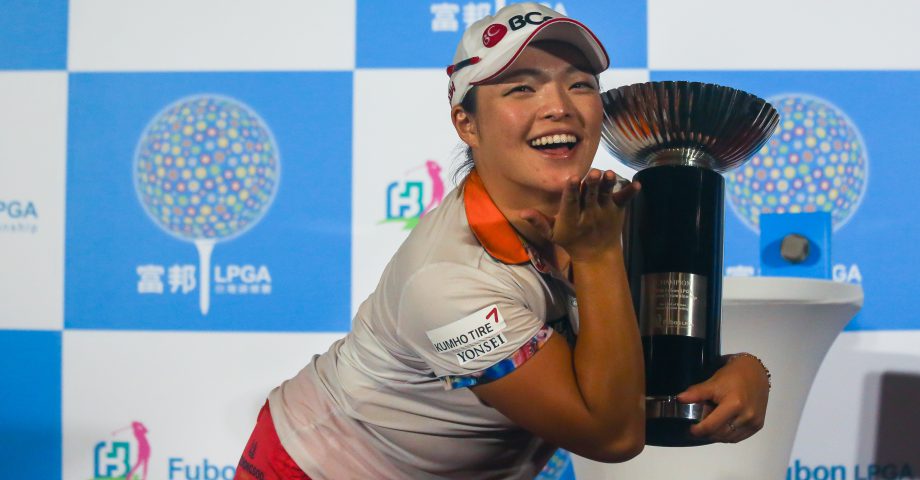 TAIPEI, Taiwan – Ha Na Jang held off Shanshan Feng by a stroke in wind and rain Sunday in the Fubon LPGA Taiwan Championship for her third victory of the year.

Eight strokes ahead of Feng after a birdie on the sixth hole, the 24-year-old South Korean player bogeyed two of the next three holes and scrambled to par the final nine for a 1-under 71.

Feng finished with a 66. The Chinese star chipped in for birdie from 35 feet on the par-4 15th to pull within two strokes, and nearly holed a bunker shot for eagle on the par-5 18th.

Jang then lagged her 15-foot birdie putt to inches, and danced on the green after tapping in.

“I was like nervous every hole,” Jang said. “Shanshan really good play today. That’s why I got very nervous. And then I’m just simple every hole because weather is just so bad. And then just keep going the fairway and the green.”

She kept the celebration short after drawing criticism in South Korea for her flamboyant victory celebrations – a “Samurai Lasso” routine in Florida in February and a “Beyonce Single Ladies” dance in Singapore in March. Also, before the Singapore event, Jang’s father dropped a hard-case suitcase that tumbled down an airport escalator and injured rival player In Gee Chun.

“After Singapore’s not really good happening. That’s why little, small dancing,” Jang said. “Yesterday my agent and all the people text me say just try small celebration. Please just you try it. That’s why I got try a little more small one. But I think it’s really good. Celebration is a little small, but looks like a little bigger. It’s like dancing like, ‘I like it. I like it.’ Like that. So happy.”

“Really solid chipping,” Jang said. “My chipping is pretty good first time my life. That’s why every par is good score, because raining so bad. So that’s these why every hole is par. … My first win weather is rainy, exactly same. I like it raining on the golf course.”

Jang shot a 62 on Saturday to take a six-stroke lead over Feng into the final round. The 62 was the lowest score in her LPGA Tour career and matched the best round in the three years at Miramar.

Feng had her third straight top-four finish. The Olympic bronze medallist was fourth in the Evian Championship and tied for fourth last week in China in the Asian Swing opener.

Top-ranked Lydia Ko shot a 70 to tie for 20th at 3 under. She won by nine strokes last year at Miramar.

The tour will be in South Korea next week, then visit China, Malaysia and Japan.