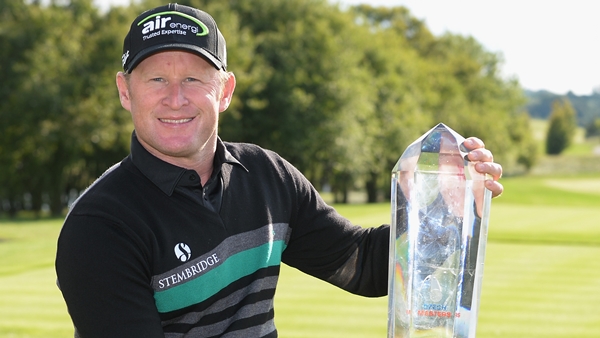 Tied for second with Soren Kjeldsen overnight, Donaldson took the lead when his Danish opponent made two straight bogeys on the last two holes of the front nine. The Welshman surged further ahead with two birdies on the first three of the back nine.

“This is big,” Donaldson said. “It’s been an amazing week. I’ve had a lot of birdies here all week. I’ve dropped too many shots, which stopped me from moving away a little bit, so today everything came together.”

Donaldson birdied six holes and dropped two shots for a total 14-under 274 in windy conditions at the Albatross Golf Resort near Prague for his third European Tour victory after the Irish Open in 2012 and Abu Dhabi Golf Championship in 2013.

Donaldson needed a top-seven finish to guarantee a debut in next month’s match against the United States at Gleneagles.

“It’s so difficult to get into the team, the lads are playing so well,” Donaldson said. “You know that you have to play well to secure your place and it did come down to the wire.”

Bradley Dredge, who led after three rounds, was two strokes back for the first 1-2 Welsh finish on the European Tour.

Dredge started the fourth round with a two-stroke lead but managed a 72 with two birdies and two bogeys for a 12-under 276 total and his second straight second place after last week’s Made In Denmark event.

“It’s been a great two weeks in terms of two seconds,” Dredge said. “Two firsts would’ve been better. Slightly disappointed I didn’t win one, but I’ll have a few more chances before the end of the year, and see how that goes.”

Kjeldsen (71) finished tied for third with Merrick Bremner of South Africa with an overall 11-under 277.

Stephen Gallacher (73) of Scotland, another Ryder Cup hopeful, shared seventh for 7-under 281 and will need a good result from next week’s Italian Open to have a chance to qualify.