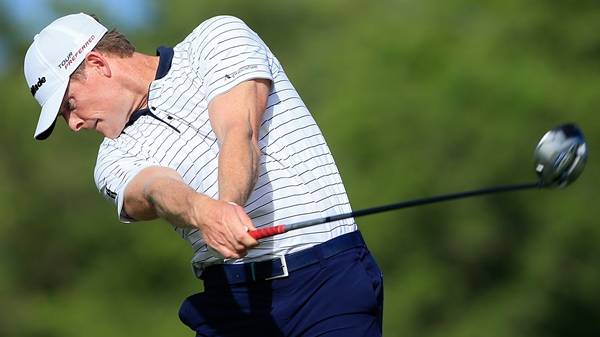 RIO GRANDE, Puerto Rico – James Driscoll matched the Puerto Rico Open record with a 9-under 63 on Friday to take a one-stroke lead after the second round.

Playing in wind gusting to 20 mph after morning rain at Trump International, Driscoll had an eagle and seven birdies in his bogey-free round. He had a 12-under 132 total.

“I had the putter going pretty hot today,” Driscoll said. “I was fortunate. I hit a bunch of shots pretty close, too. I judged the wind. Luckily, I read the wind right a couple of times. The wind was pumping pretty good. It was blowing about 20 miles an hour, but there were a few times I had some crosswinds and just judged it perfectly and hit it in there to about a foot or so.”

Driscoll also shot a 63 in the 2011 tournament for a share of the record set by Derek Lamely in his 2010 victory and also matched by Chris Tidland in 2011 and Scott Brown last year in his victory.

“The first 63, I think I was 11 under with like three or four holes to go and made two bogeys coming in, and this one was just kind of, I just kept chipping away at it and birdied the last to get to 63,” Driscoll said. “So they were a little bit different, but both pretty special. Both holed a bunch of putts and just one of those days where you hit some iron shots close and make a mile of putts.”

PGA Tour rookie Chesson Hadley was second after a 65.

“I’ve kind of been struggling all year just with ball-striking, just finding the planet, honestly,” Hadley said. “And yesterday, I don’t know, I was just talking to my swing coach again, and we kind of just like, `Look, just go back to the basics.’ I’ve always struggled with staying tall through the ball, and I just started thinking about that yesterday before my round, and I hit it great on the range, and it really started to line up yesterday. I hit it great, and then I just pured it everywhere, all over the place today.”

Eric Axley was 10 under after a 66, and Jonathan Byrd, Wes Roach, Ben Martin and Danny Lee were another stroke back. Byrd and Roach shot 66, Martin 67, and Lee 68.

The three Canadians in the field qualified for weekend action. Brantford, Ont.’s David Hearn leads the Canuck charge. He was 6-under after a 68 Friday, leaving him in a tie for 20th.

Ottawa’s Brad Fritsch also shot a second-round 68. He’s 5-under which left him in a tie for 25th.