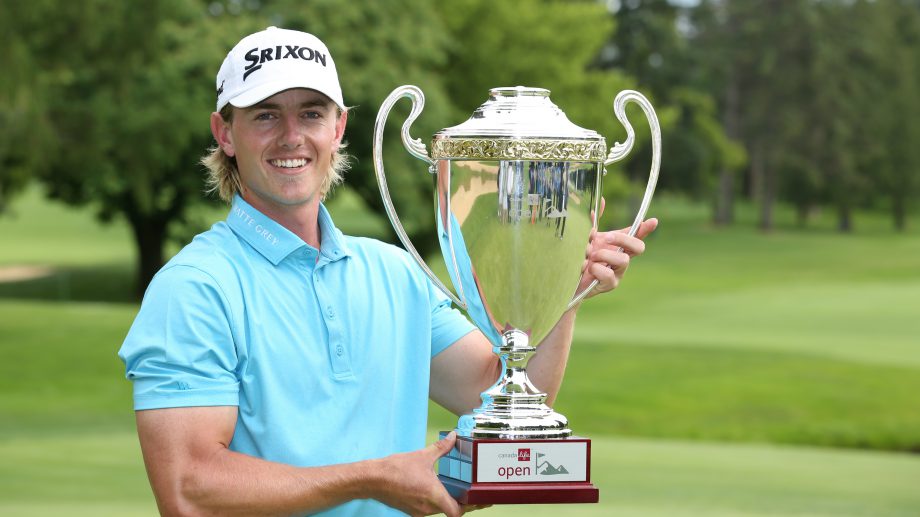 “It probably hasn’t sunk in quite yet,” said Knapp. “I got to Facetime my parents for a minute
and my brother, but I think when I talk to them about what actually happened, it’ll sink in a bit
more for sure.”

Plagued with injuries in recent years, Knapp described the past few seasons as a “long and tough
road” and was quick to give credit to his entire team who helped him battle his way back into full
competition mode.

“I love my parents, I can’t thank them enough for everything they do for me,” said the 57thranked
player from the 2017 Mackenzie Tour Order of Merit. “They put up with me 24/7 and
help me with travel and everything else. For them to stick with me through it all means the world
and I can’t thank them and my team and my family enough.”

In contention for the duration of the week following an opening-round 65, Knapp lost some
ground to the field due to a 2-under par 70 on Saturday and figured it would take a round similar
to the one he played today in order to get the job done.

“I’m staying with a host family, and Joe Harrison is there too, and we were talking about what it
might take, I said 20 or 21-under,” said Knapp. “I knew that last group would be playing in front
of a lot of people, like my group was yesterday, so I figured they’d be dealing with a little bit of
the same.

“I sent a text to my coach this morning like, ‘what does a guy have to do to shoot 8 or 9-under
today,” continued the Costa Mesa, California native. “He said plain and simple, ‘go shoot 4-
under on the front and shoot 4-under on the back.’”

Knapp is obviously a great listener. With no bogeys to speak of on the front nine, and four
birdies, he found himself halfway to his number as he spotted his name on the ninth-hole
leaderboard among a log-jam of players around 18-under par.

Making three more birdies between hole Nos. 12 and 15, Knapp holed-out from the bunker on
hole No 17 for birdie, a shot he called “the shot of my life.” One more birdie for good measure
on the 72nd hole and Jake Knapp reigned supreme by three strokes, firing 4-under on the front
and 4-under on the back.

“It means a lot, there’s so many good players out here,” said Knapp. “So many guys are going
from the Mackenzie Tour to the Web.com Tour and to the PGA TOUR, it’s obvious that this is a
proving ground to get to that next level.”

Not only does the win give the UCLA alumni a notable head-start on the Order of Merit, it also
earns him an exemption into the RBC Canadian Open, taking place from June 3-9 at Hamilton
Golf & Country Club.

“I haven’t played any PGA TOUR events since 2015, I tried not to think about that today, but it
means a lot and we’ll see what I can do against the best players in the world,” said Knapp, who
missed the cut in both his 2015 starts, one at the U.S. Open and one at the Farmers Insurance
Open. “Ideally, I’d go out there and play well and let the chips fall where they do, but it’s just
good to go test your game at that level for sure.”

Firing a final-round 71 and finishing T2, Canadian James Allenby claimed the first Canada Life
Canadian Player of the Week Award of the season and the $2,500 bonus that goes along with it.

Key Information
• Making just a single bogey on Sunday, Purdue alum Brian Carlson dropped a 12-foot
eagle putt on the final hole to sign for a final-round 66 to place T2.
• Playing on the same UCLA Bruins team as Knapp, Lorens Chan had the round of the day
at Point Grey, firing a bogey-free 63 to improve 11 spots on the leaderboard, finishing
T4.
• Firing a bogey-free 68 on Sunday, 2017 U.S. Amateur Champion Doc Redman finished
T19 in his Mackenzie Tour debut.
• Only eight of the 69 players on Sunday played their rounds over par.
• Currently in seventh place on the Web.com Tour’s Points List, Canadian Michael Gligic
earned a spot in the RBC Canadian Open, being the top 2018 Mackenzie Tour alumni on
the Web.com Tour following the Evans Scholar Championship.
• The Mackenzie Tour now heads to the second stop on the BC Golf Swing at Uplands
Golf Club in Victoria, British Columbia for the Bayview Place DCBank Open presented
by Times Colonist where Sam Fidone will attempt to defend his title. The winner of the
event will also receive an exemption into the RBC Canadian Open.

Quotable
“Coming from behind like that, you want to do your best to make as many birdies as possible.
Five-back going into the day, you try to make as many birdies as you can and make those guys
feel a bit of heat, if you can. I saw the leaderboard after nine and saw Lorens Chan was 8-under
after 12, so I knew birdies were out there and then I rolled in a putt to get to 17 or 18-under and I
tried to keep my head down and stick to my game plan like I had been the whole week, it worked
out in the end.” – Jake Knapp

“I don’t think there’s ever a time when you think you’re there. Like one of my buddies told me,
‘you’re never as good as you think you are and you’re never as bad as you think you are’. That
keeps you in that middle ground to keep working but to never get down on yourself. I enjoy
going to the gym and working out, I’m at the gym six or seven days a week and then I’m at the
course all day, so I’ve put in a lot of time and I’ve been more honest with myself this off-season
on what I really needed to get better at. I hit it pretty good off the tee but putting was something I
needed to get better at, and I putt it really well this week.” – Jake Knapp

“It’s one step closer to the end goal, moving closer and closer to that end goal, it’s what
everybody out here wants; to be on the PGA TOUR. This is great experience.” – Brian Carlson

“This was one of the best tournaments putting wise I’ve played. I didn’t have a three putt and
had a lot of good makes. I started a little slow and got on a heater on the back nine, I made a
good birdie on No. 12 and then good ones on Nos. 13, 14 and 15. It was nice to be in the hunt
and get that feeling again.” – Dylan Wu

“I got the putter going on the front side, I made four birdies in a row. I started the day 10 back,
so I wasn’t really expecting anything, I was just trying to play well and then see how it goes.” –
Lorens Chan

“Honestly, it was kind of a grind with ball striking this week. I wasn’t hitting it too well and
every day I was talking to my coach on the phone to see if I could do something different and see
if it helped. I worked on it on the range and I wouldn’t say I made too much progress, but I rolled
it really nice.” – Lorens Chan

“We have five UCLA guys here, so it’s kind of like a mini reunion, same as last year, and it
feels really good to represent UCLA.” – Lorens Chan

“This is definitely the way you want to start a season. This is my third year out here, hopefully
my last, fingers crossed, but we’ll see how it goes. My mom is a trooper, she’s been caddying for
me for a while. As long as I’m happy she’s happy” – Lorens Chan