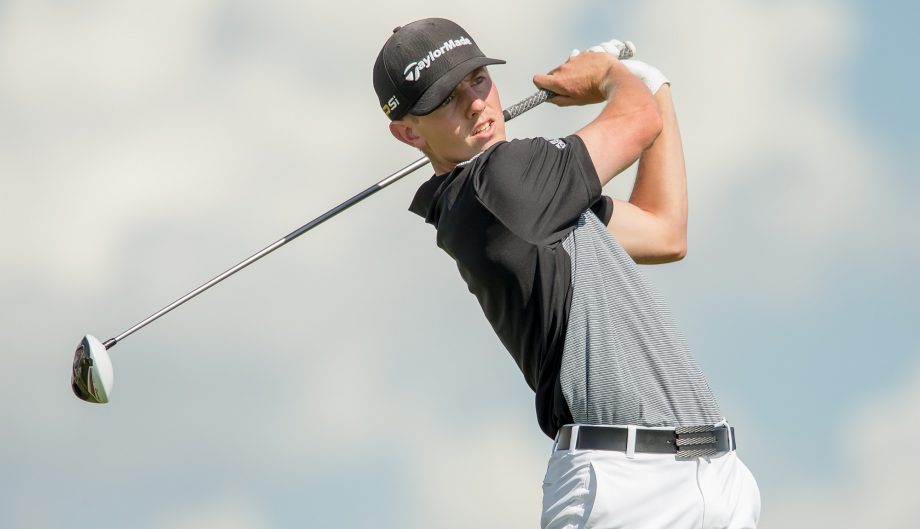 THE RECAP: Costa Mesa, California’s Jake Knapp carded a flawless 6-under 65 on Thursday at the Country Club at Soboba Springs to take the third round lead at the Mackenzie Tour – PGA TOUR Canada’s USA West #2 Q-School.

Knapp was without a bogey and made six birdies on the day to reach 13-under through three rounds, two strokes ahead of Sydney, Australia’s Cameron Davis with one round to go.

“It was great keeping the bogeys off the scorecard,” said Knapp. “Even the mistakes that I made, I kept them in relatively playable positions, and I was able to create a stress-free round.”

A long hitter off the tee, Knapp admitted he didn’t have his best ball-striking day but benefited from offseason work he’s put into his game around the greens, getting up-and-down whenever he needed to.

“Normally, when I’m playing well it means I’m striking the ball really well, but I’ve had times where my short game has had to pick me up, too, and that’s helped me a lot,” said Knapp.

BACKGROUND ON THE LEADER: A standout at UCLA, where he recorded two individual wins and qualified for the 2015 U.S. Open, Knapp decided to forgo his senior season with the Bruins to begin his pro career in January 2016.

He spent the 2016 season adjusting to the nuances of the professional game with some success, and played his way onto the Mackenzie Tour thanks to a solid performance after Monday Qualifying at the GolfBC Championship.

Now a year into his pro career, the 22-year old says he’s more used to the fast-paced world of playing for your livelihood.

“I think for me,” said Knapp, “professional golf has been much faster. In amateur and college golf, you have an event, and then an off week. It’s not as quick and you have more time to practice.

“When you’re playing professionally, you have to learn to practice on the road and try to get more out of your rounds and learn from every shot.”

With an eye on the upcoming season, the long-bombing Knapp says he’s looking forward to competing in Canada and playing on some of the tree-lined, tight courses commonly found on the Mackenzie Tour.

“You have to learn to play all kinds of golf, so picking the Mackenzie Tour was the best fit for me because I felt like it was going to improve the parts of my game that I felt like needed to get better,” said Knapp.

“I made some good putts in the mid 20-foot range. I got off to a shaky start with a bogey, but just kind of calmed myself down knowing that I had made two the day before and played really well.” – Former Players Cup champion Chris Killmer on bouncing back from an early bogey on Thursday.

“I’m driving it a lot better. I’m just hitting it a lot better. Last year was just a struggle. My short game was actually decent, but I didn’t give myself enough good looks, and the scores are so low there that you have to give yourself chances.” – Nick Delio, who made four cuts in 11 starts last year, on improving his game from 2016 to 2017.

“I had been scrambling a lot the first couple of days, so I came out to the course early to work on my game a little bit. Even though I was 2-over through seven, I knew I had better game than the scores were showing.” – Eric Banks, who moved up to T18 with a 2-under 69 on Thursday.

Davis turned pro in 2016 after a standout amateur career that included individual wins at the 2015 Australian Amateur and 2016 World Amateur. He narrowly missed out on earning a spot in The Masters after finishing second at the 2015 Asia Pacific Amateur.

Upon turning pro, Davis made a splash by finishing T15 after earning an exemption into the PGA TOUR’s OHL Classic at Mayakoba.