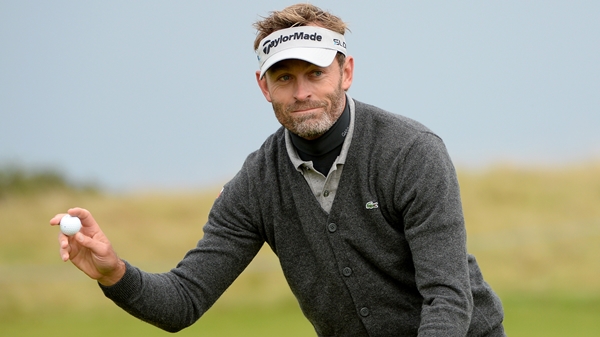 ST. ANDREWS, Scotland – Raphael Jacquelin of France birdied his last two holes for a 2-under 70 to break clear of a tightly packed leaderboard and take a one-shot lead after the second round of the Alfred Dunhill Links Championship.

Four players – Irish duo Padraig Harrington and Shane Lowry along with Frenchman Alexander Levy and England’s Oliver Wilson – were in a tie for second, with three others another shot back. At one stage late in the day, nine players were tied for the lead before Harrington jumped in front and Jacquelin then leapfrogged him with his strong finish for a 9-under total of 135.

The tournament is played on three courses, with 11 of the players in the top 12 having played Kingsbarns on Friday. Lowry was the only exception, shooting a 70 at St. Andrews.

“It’s always nice to finish birdie-birdie, but it was difficult out there,” Jacquelin said. “I am in a nice position and right where I want to be. I played really well yesterday shooting a 65 at Carnoustie and putting really great, but then today here at Kingsbarns I just didn’t get the pace of the greens.”

Top-ranked Rory McIlroy shot a 67 on Kingsbarns to sit five shots back. McIlroy started on the back nine and was 1 over through six holes before an eagle on No. 16 and a birdie on the next got him going. He added four more birdies and a bogey on his last nine holes.

“The eagle on 16, or my seventh hole, kick-started something for me and I just went from there and started seeing a few more putts roll in,” he said. “That gave me a little bit more confidence, and looking at the leaderboard I am only five shots behind with two rounds to play.”

Harrington is looking to end a six-year title drought, having failed to win a tournament on either of the main tours since capturing a third major at the 2008 PGA Championship.

The 43-year old has slipped to 324th in the world rankings, and said his main goal now is to qualify for the 2016 Olympics.

“That’s where I am focused so I’ve got two years to achieve that goal, and it makes no difference where I am in the world now,” Harrington said. “So I am starting at `ground zero’ and working my way up to becoming an Olympic athlete. That would be very special.”

Scottish duo Richie Ramsay (68) and Chris Doak (67) were in a share for sixth place with American Ryan Palmer (68).

Stephen Gallacher carded a 70 to move to a share of ninth place at 6 under to be the best of the four European Ryder Cup winners competing this week.