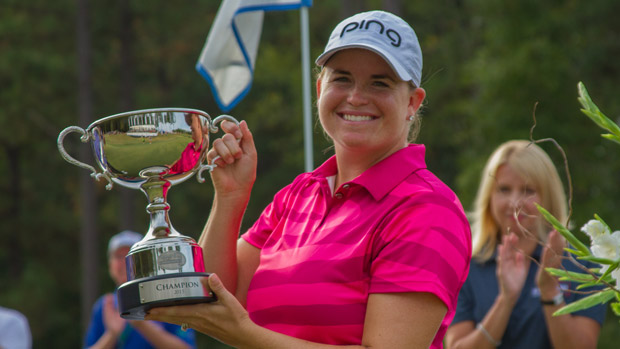 EL DORADO, Ark. – Jackie Stoelting won the El Dorado Shootout on Sunday for her first Symetra Tour title, closing with a 2-under 20 for a three-stroke victory.

“I just woke up this morning and had this feeling that I could win today and that’s an awesome feeling,” Stoelting said. “It’s been a long time coming and I’m so excited to be the champion today.”

“It’s a tough golf course,” Stoelting said. “It’s all about placement. You’ve got to be able to hit good approach shots and then you have to make putts and fortunately I came out on top this week, which is everything that I could ask for.”

Stoelting finished third on the Symetra Tour money list last season to earn her LPGA Tour card, but make only two cuts this year and is preparing for the final stage of LPGA Qualifying School.

“It was a tough, tough year out there,” Stoelting said. “I actually made more money today than I did all year out on the LPGA so I really just wanted to play a couple of events to gain my confidence back because I know that I’m a good player. To be honest it helped a lot not having to worry about a money list and just play golf. It doesn’t mean that the nerves weren’t there but it means everything to me that I had the chance to come out here and preform and play well. This is definitely the boost that I needed.”

Ally McDonald was second after a 71.

Chie Arimura and Daniela Iacobelli tied for third at 1 over. Arimura shot a 71, and Iacobelli had a 72.