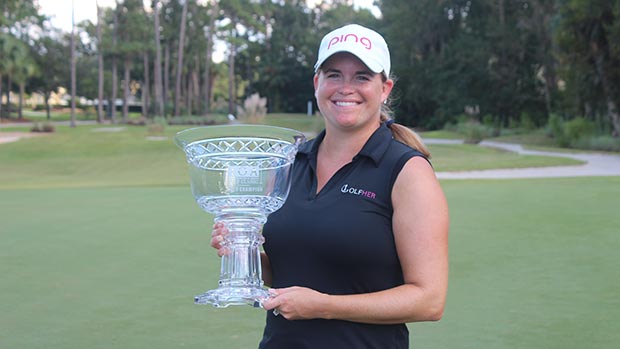 LONGWOOD, Fla. – Jackie Stoelting won the IOA Golf Classic on Sunday for her second straight Symetra Tour title, shooting her third 4-under 67 for a two-stroke victory.

Finishing the season as a non-member on the Symetra Tour after struggling on the LPGA Tour, Stoelting won the El Dorado Shootout two weeks ago in Arkansas for her first tour title.

“It was a huge monkey off my back to win two weeks ago and now to win two in a row after six professional seasons is everything I could have asked for,” Stoelting said. “This is definitely the confidence I needed and an extra bonus to win twice.”

The 29-year-old former Florida Southern player finished third on the Symetra Tour money list last season to earn her LPGA Tour card, but made only two cuts and earned just $7,475 in 18 events. She’s preparing for the final stage of LPGA Qualifying School.

Stoelting earned her second straight $15,000 check, though her earnings don’t count on the money list. She’s the first player to win consecutive events since Esther Choe in 2012.

With her father serving as her caddie, and her mother, husband and many other family members watching, she hit a hybrid to a foot to set up a birdie on the par-4 17th and closed with a par.

“It has been a long journey to get here, I spent five years on the Symetra Tour,” Stoelting said. “None of my family was in Arkansas so to have them all here was just awesome. I’m glad that they got to witness it and be a part of it this time.”

Brianna Do was second after a 68. She made a 7-foot birdie putt on the final hole to finish second alone, and earned $9,342 to jump from 18th to 12th on the money list with $51,037. The top 10 next week after the season-ending Symetra Tour Championship will earn LPGA Tour cards.

“It wasn’t going to be a win with a birdie, but I hit a really good tee shot and I’m glad I made that putt,” Do said. “It was a nice way to end the round.”

Sara-Maude Juneau finished 4-under and was the top Canuck finisher. The Quebecor tied for 20th.