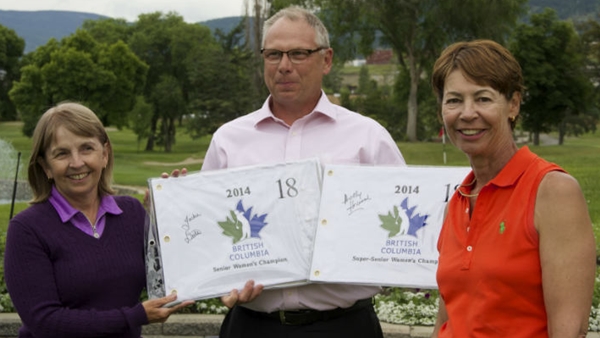 Little closed out the championships shooting 78-73-78 for a final of +7 on the 5919-yard par-74 course with a comfortable six-stroke lead.

“The golf course was in fabulous shape, the greens were beautiful. And tricky,” said Little. “I haven’t been here for 10 years, and I forgot how subtly tricky these greens are.”

Four bogeys on the back nine and tricky greens made less of an impact after the Port Alberni resident shot a championship-best 73 on the second day of competition and entered the final round five strokes ahead of Horwood in second.

In addition to taking the titles in individual competition, Little won the Zone Team Competition on Wednesday as part of the Zone Six team with Karen Kloske.

Horwood struggled on the back nine for the second day in a row, carding a total of seven bogeys out, but had cultivated a strong enough lead during the first two days of competition to hold second place in the Mid-Master and Senior Championships and first in the Super-Senior event shooting +13 (75-78-82).

“It’s so nice that they do honour the over-60’s, I think that’s very important for the longevity of the game,” said Horwood.

The 2006 & 2007 Champion’s performance was highlighted by two eagles both on number six on the first and second days of competition.

Penny Baziuk, representing Ardmore Golf Course, finished at +15 (78-79-80) to round out the top three in the Mid-Master and Senior Women’s Championships. Baziuk played consistently over the three days of competition earning her bronze medal finish and the final spot on the provincial team that will compete at nationals in August.

In the Super-Senior Championship, Alison Murdoch of Victoria, pulled off a spectacular come-from-behind performance, finishing second at +16 after her best round of the championship. Murdoch recorded three birdies on the final day of play; Murdoch improved her scores each day shooting 83-79-76.

Defending Senior Women’s champion, Lynda Palahniuk placed third in the Super-Senior Championship despite struggling on the final day of competition shooting an 84 to finish the Championship 17-over par (76-79-84).

Dee Horie and Sheila van Gisbergen finished first in the best-ball competition. Scoring for this event was taken from the teams combined best score for each hole over the three days of competition; it differs from a four-ball competition in that teammates were not paired together.

The pair finished at an impressive 36-under (60-63-63) with a total of seven eagles and only two bogeys blemishing their scorecard.

Darleen Michell and Susan Ovans finished second in the best-ball competition 28-under par (65-64-65) followed two stroked behind by Nina Henriksen and Susan Russell (71-63-62).