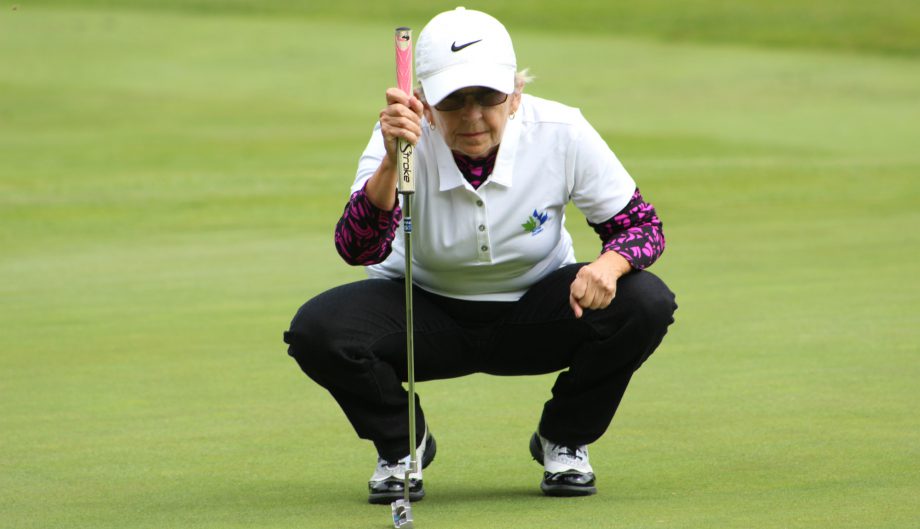 In windy conditions during the second round of the Canadian Women’s Mid-Amateur and Senior Championship at Humber Valley Resort, in Little Rapids, N.L., Jackie Little of Procter, B.C., posted a 3-over-par 75 for the second consecutive day to lead the Senior division by one stroke.

Little, 59, got off to a rocky start and was 3 over par after four holes. She had prepared for the forecasted rain by wearing contacts but after taking them off on No. 5 she promptly turned her day around with birdies on No. 6 and 7. A double-bogey on 16 was her only blemish the rest of the round.

“I was starting to think oh boy this isn’t going well,” said a smiling Little. “But I took my contacts out because they were bugging me and figured if it rains too bad. Then I made two birdies right away so I guess I did the right thing.”

Little is no stranger to being in contention at this championship. She won the Canadian Women’s Senior Championship back-to-back years in 2008 and 2009. Her game plan isn’t going change as she tries to capture a third title tomorrow.

“Tomorrow I’m going to try and stay steady,” added Little. “I’ll see what weather and wind we have tomorrow and just play it hole-by-hole.”

After starting the day in a tie for fifth, Canadian Golf Hall of Fame member Mary Ann Hayward matched the lowest score of the day in the Senior division with a 2-over-par 74 to take sole possession of second after 36 holes.

“I had lots of looks, I just didn’t make many putts,” said Hayward. “I’ve been playing well for the last couple weeks. You just need to be patient. Tomorrow I’ll just be plugging along hoping some putts will drop.”

First-round leader Marie-Thérèse Torti (Candiac, Que.) is in third place at 9 over par.

On the strength of Kyrinis and Hayward’s matching rounds of 74, Ontario won their fourth consecutive inter-provincial team championship at 18 over par. First round leader Quebec fell into a tie for second with British Columbia at 22 over par.

Diane Dolan from Gatineau, Que. – the 18-hole leader in the 60-and-over Super Senior division – held on to win the 36-hole competition by carding a 7-over-par 79 in round two. Dolan won the division by four strokes over defending Super Senior champion Holly Horwood of Vancouver, B.C.

“I’m thrilled to win,” said Dolan. “I wasn’t even sure if I wanted to come to this event because of the season I’ve been having so it’s great to have some success here.”

Lauren Greenlief of Ashburn, Va., continues to lead in the Mid-Amateur competition at 3-under-par after carding a 1-over-par 73 in round two. The University of Virginia graduate has an eleven-shot lead over Winnipeg’s Bri-Ann Tokariwski who posted a 3-over-par 75 in round two.

“Any time you get to play in a national championship of course you take it,” said Greenlief. “Tomorrow I’m going to stick to my game plan I have for every hole and just be patient.”

Click here for more information on the Canadian Women’s Mid-Am and Senior Championship including tomorrow’s tee times and pairings.

NOTE TO MEDIA: Click here to download photos from round two of the Canadian Women’s Mid-Amateur and Senior Championship. (Credit: Golf Canada)