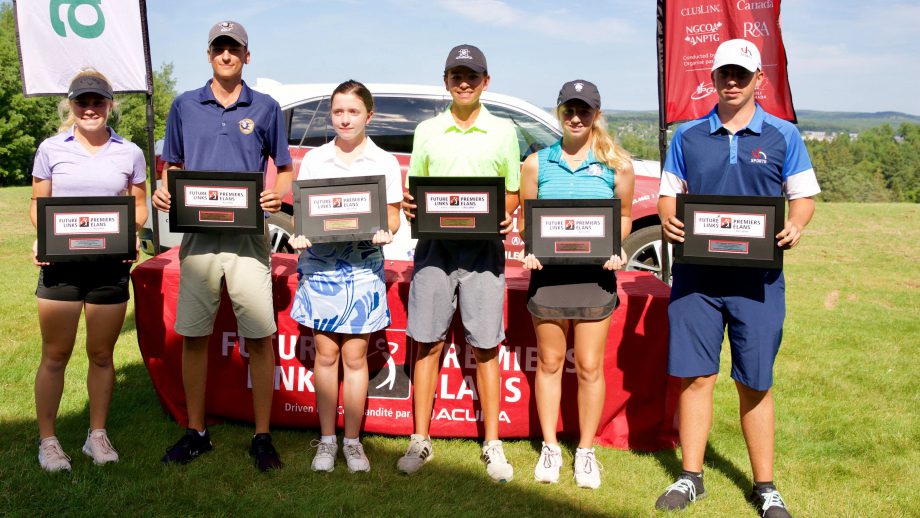 HARTLAND, N.B. – Isabella Ferguson of Ottawa completed an incredible comeback to win the girls division, while Malik Dao of Notre-Dame-de-l’Île-Perrot, Que., maintained his lead to the win the boys division at the Future Links, driven by Acura Atlantic Championship at Covered Bridge Golf & Country Club on Thursday.

Ferguson was in a tie for third entering the final round, trailing leader and defending champion Haley Baker of Halifax by 10 strokes. The 14-year-old carded the only under par round in the girls division over the three tournament days. Her 2-under-par performance was enough to surpass the defending champion, but Baker forced a playoff with birdies on each of her final two holes.

On the first playoff hole, Baker missed a ten-foot birdie putt, and Ferguson dropped her four-footer to birdie the par-5 1st and win the title.

“I started with two birdies on the first four holes. That definitely gave me confidence,” said Ferguson. “I was very nervous [in the playoff]. I had a good drive which calmed me down a little bit. I was all shaky over my putt, but I kept it together.”

It was the second consecutive year that Baker and her younger sister, Abbey, both finished in the top-three at the Future Links, driven by Acura Atlantic Championship. Abbey finished third at 15 over for the tournament, one shot ahead of Heather McLean (Port Williams, N.S.), with Julie Gauvin of Dieppe, N.B. in fifth.

Dao, recorded an even-par 72 in the final round to win the tournament by two strokes. He is the second member of the Dao family to capture a Future Links title – his older sister, Céleste, won the 2017 Future Links, driven by Acura Québec Championship.

“On No. 16, which is a tough hole, I made two really good shots,” said Dao. “I knew that I had the tournament at my fingertips then. This year I was really struggling, and this is a big win for me. It’s my first national win.”

Daniel Kirby, a Hartland, N.B., native who was playing at his home course, led for the majority of the final round. A double-bogey on the par-4 16th from Kirby opened the door for Dao, who made two clutch birdies on his final four holes to win the tournament.