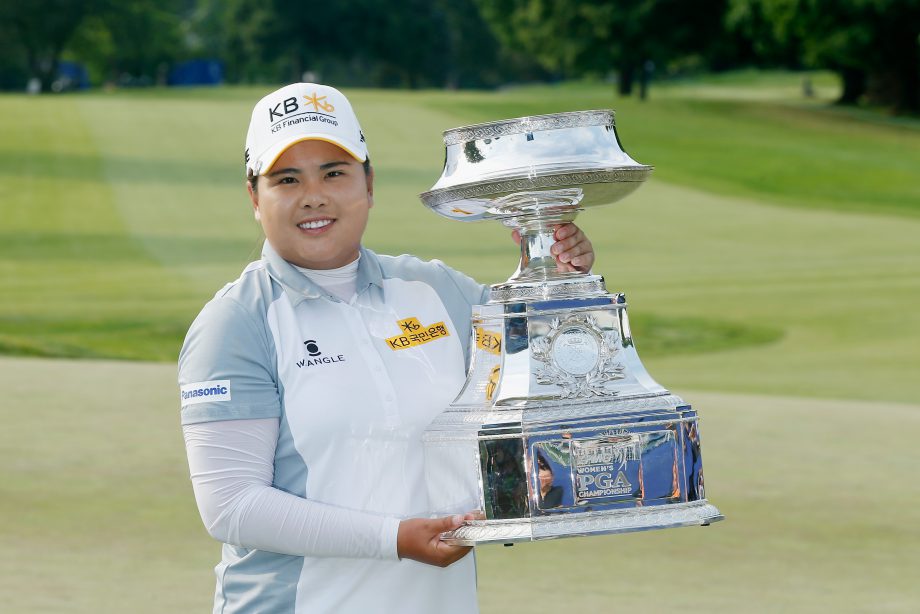 Park also regained the No. 1 ranking in the word, surpassed idol Se Ri Pak for the most majors by a South Korean player with six, tied the LPGA Tour record for the lowest score in a major in relation to par at 19 under and, in her own mind, cemented a place in women’s golf history.

“Obviously, putting my name alongside like Annika Sorenstam or Patty Berg, legends of golf, just being a part of history of this golf tournament, I feel extremely honored, and I can’t believe that I just did it,” Park said.

The 26-year-old Park closed with a bogey-free 5-under 68 at Westchester Country Club, finishing the season’s second major five strokes ahead of 22-year-old compatriot Sei Young Kim. Park had 22 birdies and only three bogeys in 72 holes.

“I played great the last three days,” she said. “I couldn’t believe myself. I made no bogeys for three days.”

Park and Sorenstam (2003-2005) are only players to win the event previously called the LPGA Championship three consecutive years. It also was Park’s fifth victory in the last 12 majors.

Park won the previous two years in playoffs in Pittsford, New York, taking the 2013 event at Locust Hill and the 2014 tournament at Monroe Golf Club.

Park birdied the par-5 final hole. She chipped her third shot to 5 feet, then sank the putt and threw her arms in the air as a fan yelled “Three-peat!”

It was her 56th consecutive hole without a bogey.

Kim, a two-time winner this season as a rookie, started the day two strokes back. She bogeyed the third and the fourth holes, then reeled off four consecutive birdies, holing a long putt on the eighth to pull within a shot of the lead.

That was as close as she would get.

A three-stroke swing on the ninth hole put Park in charge. She made a birdie putt, then watched as Kim three-putted for double bogey. Kim finished with a 71.

“Everything fell apart at the ninth hole,” Kim said through an interpreter.

Lexi Thompson was third at 12 under after a 66. She had eight birdies on her first 13 holes.

Thompson pulled within two strokes with her birdie on the 13th. But she missed a chance on the par-5 15th hole, hitting her tee shot well right and scrambled to make par. She then bogeyed the 16th to end her chances.

“(I) just take a lot of positives from it knowing that I can pull off a round on Sunday here,” Thompson said. “It means a lot and I’m going to take a lot of confidence going into my upcoming tournaments.”

Brittany Lincicome, the winner of the first major of the year at the ANA Inspiration, finished fourth at 11 under. She birdied the final hole for a 68.

Seventeen-year-old Canadian Brooke Henderson tied for fifth with Morgan Pressel at 10 under. Her $132,725 check will help in Henderson’s bid to earn a tour card for next year. She needs to either win a tournament or finish with the equivalent of the 40th player on the money list to avoid qualifying school after being denied an age exemption.

Fellow Canadian Alena Sharp signed for a final round 76 to finish tied for 65th.

With No. 1 Lydia Ko missing the cut for the first time in 54 tries, No. 2 Park needed to finish just 29th or better to retake the top spot she last held in February. It will be her third stay at the top of the rankings. She was to the No. 1 for 59 weeks in 2013.

Park earned $525,000 for her third LPGA Tour victory of the season and 15th overall.

She joined Sorenstam, Pak, Patty Sheehan, Nancy Lopez, Kathy Whitworth and Mickey Wright as the only players to win the event at least three times. Wright won it four times.

“I think I always dreamed myself being a part of history, leaving my name, even before I die, there is my name on this trophy” Park said. “There’s a name on the U.S. Open trophy. There’s my name on great championships.”