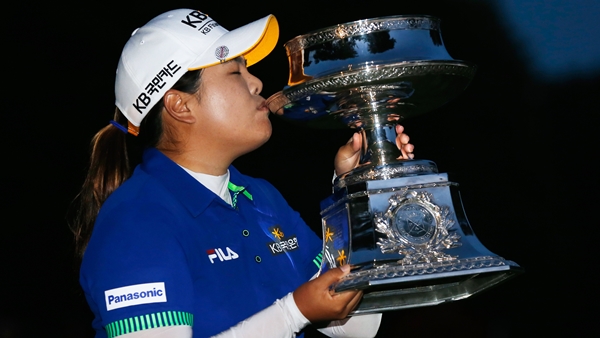 PITTSFORD, N.Y. – Inbee Park successfully defended her title in the LPGA Championship, beating Brittany Lincicome with a par on the first hole of a playoff Sunday to end the United States’ major streak at three.

On the playoff hole on Monroe Golf Club’s par-4 18th, Park hit her second into the rough behind the hole. Lincicome hit her approach to the left fringe, nearly identical to her position on the final hole of regulation when she made a bogey to fall in the playoff.

Lincicome chipped 6 feet past the hole and failed to convert for bogey. Park, the winner last year at Locust Hill in a playoff with Catriona Matthew, chipped to 3 feet and calmly sank her par putt for her fifth major title and fourth in the last two seasons.

Americans had won the first three majors of the LPGA Tour season for the first time since 1999. Lexi Thompson began the run at Kraft Nabisco, Michelle Wie won the U.S. Women’s Open and Mo Martin the Women’s British Open.

The 26-year-old Park, from South Korea, was coming off a playoff loss to Mirim Lee last week in Michigan. Park also won this season in Canada and has 11 LPGA Tour victories.

She’s projected to jump from third to second in the world, passing 17-year-old Lydia Ko of New Zealand. Ko, trying to become the youngest major winner in LPGA history, shot a 70 to finish third at 8 under.

Spain’s Azahara Munoz (70) and Sweden’s Anna Nordqvist (71) tied for fourth at 6 under.

Lincicome squandered the lead she had held all day on the final hole of regulation. She hit her second shot to the left fringe and was in a good spot, but a long delay for a ruling on a shot by Suzann Pettersen only heightened the tension, and it showed.

With top-ranked Stacy Lewis among the gallery clapping, Lincicome left her first putt 8 feet short and failed to make par, forcing the playoff.

Pettersen, a two-time major winner, started the day a shot behind as she chased her first win this year. But her day went badly at the start and she shot 4-over 76. She tied for sixth at 5 under with Lewis (68), Julieta Granada (71), Shanshan Feng (72) and Lee (74).

Park’s clutch birdie putt at No. 17 put her in position to challenge and her par save at 18 was crucial. Her approach on the closing hole landed in the rough to the right of the green and she botched her shot out. Her 12-foot putt left no margin for error and the crowd roared when it rolled in.

Lincicome had held the 54-hole lead at a major only once before, at the 2006 U.S. Women’s Open, but she faltered with a closing 78 and finished seventh. This time, she shook off the nerves until the end as the chance to win her second major ended in disappointment. Lincicome won the 2009 Kraft Nabisco.

Leading by two shots at the turn and with two generous par 5s ahead, Lincicome, who admitted a serious case of the nerves Saturday, birdied the par-4 11th to offset Park’s birdie at No. 12.

Park, who had made a bogey and two pars at the hole the previous rounds, got a huge reprieve when Lincicome faltered at the 12th.

Lincicome hit her second shot into rough on a severe slant above a greenside bunker, barely made it up to the edge of the fringe, then botched her third shot, nearly double-hitting it, and made bogey as her lead dwindled to one shot. It was her first bogey on a par 5 in the tournament.

Lincicome saved par at the par-3 13th hole with a nice putt that caught the lip and dropped.

Park’s bid to tie failed when her 8-foot birdie putt slid by the right side of the hole.

Lincicome rebounded with a birdie at the par-5 14th hole for some breathing room, and it wasn’t easy. Her second shot landed in the rough, but she made a brilliant pitch that stopped a foot from the hole.

The tour made the switch this year to Monroe after 37 years at nearby Locust Hill. The Donald Ross-designed course is about 300 yards longer at 6,717 yards and does not have a single water hazard, but it does feature 106 bunkers, more than double the number at Locust Hill, and the wider fairways favor long hitters.

Jennifer Kirby of Paris, Ont. was the lone Canadian to make the 36 hole cut. She finished tied for 53rd at 5-over 293.