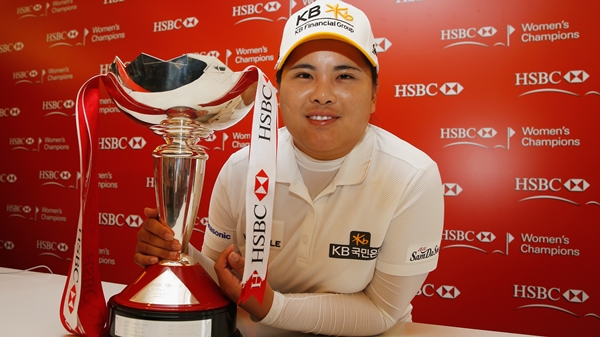 SINGAPORE – Inbee Park claimed her 13th career LPGA title by winning the HSBC Women’s Champions on Sunday, shooting a 2-under 70 in the final round to win by two strokes.

Park, who started the day with the same two-stroke lead, had birdies on Nos. 7 and 11 at Sentosa Golf Club to finish the tournament at 15-under 273, clear of 17-year-old Lydia Ko, who also shot a 70.

Park hasn’t carded a bogey since the third round of the Honda LPGA Thailand, a streak of five consecutive bogey-free rounds.

“This week was just incredible,” Park said. “I don’t think I can even believe myself that I didn’t make any bogeys for 72 holes. I mean, if I thought about bogeys, when am I going to make bogey; if I was afraid of the bogeys, I’d probably make bogeys. But I thought, whatever happens, it’s just meant to be.”

Stacy Lewis had a bogey on the final hole for a 72 that left her in third place, four strokes off the lead.

Azahara Munoz, who was runner-up last year, tied for fourth at 10-under with Shanshan Feng and So Yeon Ryu.

Defending champion Paula Creamer had a 74 to tie for 55th place.

Park, Ko and Lewis played in the final group on Sunday, with Park holding the overnight lead at 13-under and Ko and Lewis tied in second place at 11 under.

Ko made consecutive birdies on the fourth and fifth holes to pull even. They remained tied for the lead at 14 under after both had a birdie on the seventh, while Lewis trailed by two strokes.

Ko stumbled with a bogey on the eighth, allowing Park to make the turn with a one-shot advantage.

But Ko’s chances of a seventh career LPGA victory and her third win in as many weeks were all but erased with bogeys on Nos. 12 and 13.

“On this course, it’s not that hard to lose shots,” Ko said. “There are some lip outs and there are so many close ones. But I finished well with a birdie on 18, and I had a great stretch of three weeks, and I would have never imagined to have one second place and two wins.”