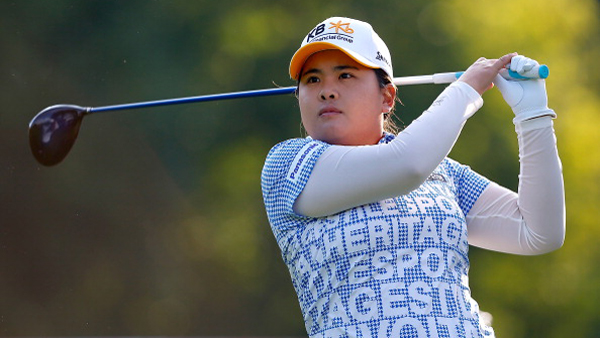 The South Korean player took the second-round lead Friday in the Meijer LPGA Classic, birdieing her first three holes en route to her second straight 5-under 66.

The third-ranked Park finished on the front nine, adding birdies on the par-5 fifth and eighth holes in her bogey-free round at Blythefield Country Club. She won six times last year and took the Manulife Financial in June in Canada for her 10th LPGA Tour title.

“My putting feels like I’m back to last year,” Park said. “Hopefully, I can hole some more putts the next two days.”

After using a mallet putter since 2008, Park tried a friend’s blade putter Tuesday and started making putts. She hasn’t stopped since with 27 putts in each round after having TaylorMade quickly make her an identical version.

“I just never used that style of putter for a long, long time and I just wanted to have a change because I tried everything else and it didn’t really work,” she said. “This was pretty much my last option.”

She said the improved putting was especially obvious in the second round.

“Yesterday I hit a lot of the shots closer, but today I made 15 to 20-footers, at least a couple of them,” she said.

Fourth-ranked Suzann Pettersen was a stroke back. The Norwegian player matched the course record with a 64.

South Korea’s Mirim Lee also shot 64 to reach 8 under, and South Korea’s Amy Yang was fourth at 7 under after a 67.

Second-ranked Lydia Ko, the 17-year-old New Zealand player coming off a victory in the Marathon Classic in Sylvania, Ohio, was tied for fifth at 5 under after a 68. Germany’s Sandra Gal, the first-round leader, also was in the group at 5 under, following her opening 65 with a 72.

Top-ranked Stacy Lewis, a three-time winner this year, was even-par after a 72.

Pettersen, who won the last of her 14 LPGA Tour titles last year, is coming off a three-week break from competition, but free from back pain that hampered her earlier this year and eager to play again. She said it was nice to go low.

“It’s not like the easiest course if you miss the fairways,” she said. “I just tried to play to my strength, hit fairways, hit greens and I made a couple of putts.”

Lee said she hit the fairways and made long putts. She was clearly elated with her play.

Ko seemed surprised to be in the hunt and admitted she isn’t hitting the ball well.

“I had to make an up-and-down a lot of times,” she said. “I mean, I was kind of struggling with my long game but luckily my chipping and short game worked really well.”

Pettersen, who played in the same group, called Ko the chipping queen on the tour.

“It’s just phenomenal to see such a great touch around the greens,” she said.

Women’s British Open winner Mo Martin withdrew Friday morning because of a thumb injury. It was unclear if she will play next week in the LPGA Championship.

Rebecca Lee-Bentham is the leading Canadian, sitting tied for 25th at 1-under 141.

Alena Sharp and Lorie Kane also made the 36-hole cut, while Jennifer Kirby and Sue Kim had their week’s cut short.