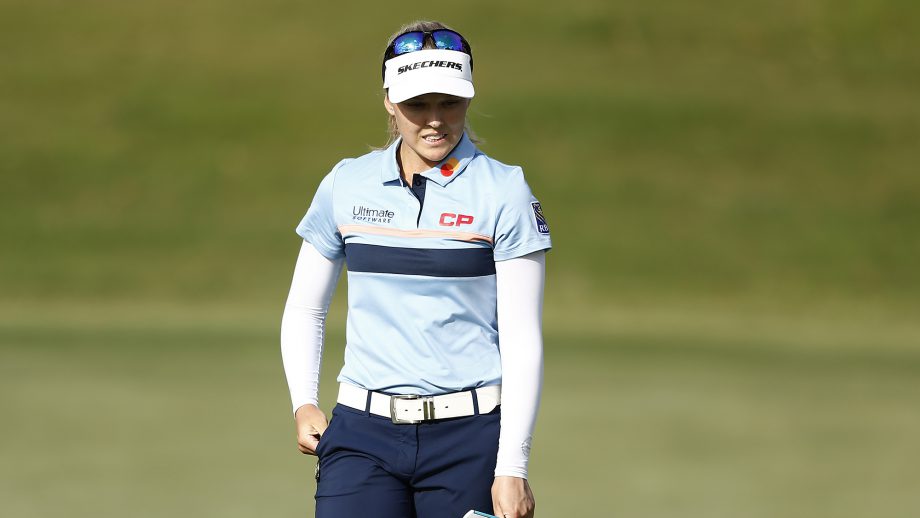 LAKE BUENA VISTA, Fla. – Inbee Park finally made a bogey, but she still finished with a 4-under 67 Saturday and a two-shot lead over Sei Young Kim heading into the final round of the season-opening Diamond Resorts Tournament of Champions.

Brooke Henderson of Smith Falls, Ont., fell into a tie for fifth place after she carded a 1-over 72 on Saturday. Henderson now sits five shots back of the leader heading into Sunday’s final round.

Park, a 19-time winner on the LPGA Tour, hadn’t made a bogey since November’s season-ending CME Group Tour Championship. But she finally dropped a shot when she three-putted the difficult 211-yard par-3 18th.

To that point, Park had been precise and consistent and had a decent day with the putter. She hit 16 of 18 greens in regulation and made five birdies. Three consecutive birdies starting at the par-4 13th built her lead to three shots.

“Well, it’s always disappointing to finish with a bogey … So I think I’ll just go ahead and make some birdies tomorrow,” Park said.

Closest to Park is Kim, whose three victories in 2019 included the lucrative CME Group Tour Championship. Kim made five birdies in a wild second nine and shot 67. Nasa Hataoka shot 68 and will begin Sunday three shots behind the leader.

With 10 victories, Kim widely is regarded as the most talented player on tour who has yet to win a major. After a sloppy bogey at the 13th hole, she bounced back by reeling off birdies on her next four holes. At the par-5 17th, she hit a 3-wood from 209 yards into the wind that finished 10 feet right of the hole, and narrowly missed the eagle attempt.

“Her (short off-season) break was good and it looks like she picked up where she left off,” said her caddie, Paul Fusco. Asked the biggest strength of Kim’s game, he answered, “Everything. She’s relaxed, and she makes it look very easy. She’s special.”

Kim was in high school when Park broke through to win for the first time as a pro at the 2007 U.S. Women’s Open, the first of Park’s seven majors. Kim has played in the final round on Sunday with Park previously, and win or lose, has enjoyed the experience. In 2015, Kim holed out from 154 yards to beat Park in a playoff at the Lotte Championship in Hawaii; she lost to Park in a playoff at the Women’s PGA Championship.

Kim’s $1.5 million winner’s check at the CME Group Tour Championship was the richest prize ever won by an LPGA player. Kim, who turns 27 on Jan. 21, was asked earlier this week if she’d made any big purchases with her winnings. “I buy a lot of dinner,” she said.

With this being an Olympic year, Park, the gold medallist in Rio de Janeiro when golf returned to the Olympics in 2016, decided to get to work a little earlier than normal. She hadn’t made a January start since 2016, but currently ranks as second alternate among competitors from South Korea, a country that boasts four players among the top seven in the world rankings. Park spent 106 weeks in her career at No. 1, but currently is 16th.

How important are the Olympics to her? Park’s dog is named Rio.