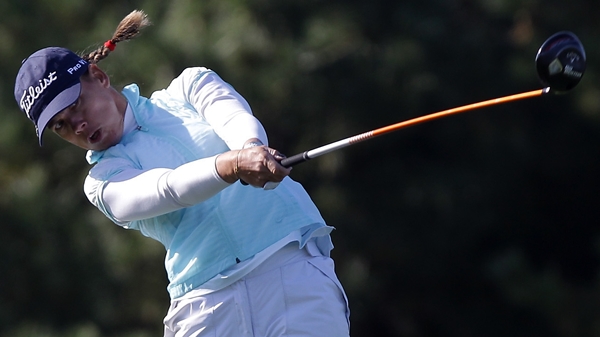 INCHEON, South Korea – Karine Icher of France shot a 4-under 68 in the second round to take a one-stroke lead and sit atop the European-dominated leaderboard at the KEB-HanaBank Championship on Friday.

Icher birdied three of her final four holes for a 5-under 139 total on the Ocean Course at the Sky72 Golf Club.

Brittany Lincicome of the United States, who birdied her final two holes for a 70, and Beatriz Ricari of Spain (70), were tied for second.

Azahara Munoz of Spain (69) was among those tied for fourth, two strokes behind, as was Suzann Pettersen of Norway and Sandra Gal of Germany, who shot 71s.

The wind subsided but Icher said she played “a completely different course” in the second round because of the changing wind directions.

“This week, my coach was here and we practiced a lot of low shots,” Icher said. “It seemed to pay off. Here, it’s always windy. I’ve never played in Korea without wind. Low shots are pretty strong in my game now.”

Icher has five victories on the Ladies European Tour but none on the LPGA circuit.

“It’s the final four or five tournaments for us, so I’d like to win one,” Icher said. “There’s nothing else I’m looking for.”

Lincicome’s tee shot on the par-3 17th hole nearly won her a new car for a hole-in-one when it rolled and hit the flagstick, but it bounced a few feet away.

“I like tournaments where not too many, maybe like five or 10-under par wins, so just keep doing 2-under each day, and I’m right there,” Lincicome said.

No. 3 Lydia Ko of New Zealand shot 69 after an opening 73 and was three strokes behind and tied for 10th along with Haeji Kang of South Korea, who led by two strokes after an opening 67 but shot 75 Friday.

U.S. Women’s Open champion Michelle Wie improved from her opening 76 with a 70, and was seven strokes off the lead. Wie is making her first start since withdrawing during the first round of the Evian Championship in September after reinjuring a stress fracture in her right hand.

Women’s British Open winner Mo Martin also improved from her opening 78 with a 69 in her return from a thumb injury. She’s eight strokes behind.

Defending champion Amy Yang of South Korea, who made 69 on Thursday, posted 79 with eight bogeys and one birdie and was nine behind Icher.

There was no second-round cut in the field of 78.