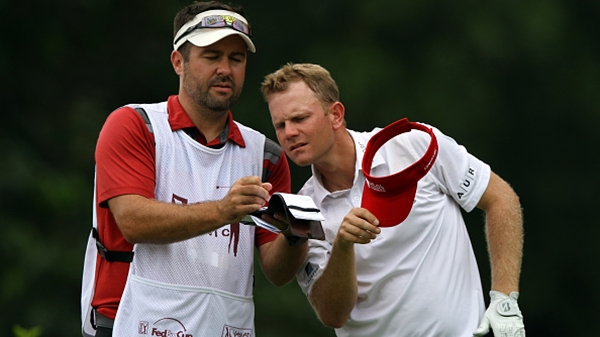 KUALA LUMPUR, Malaysia – Billy Hurley III made six birdies on his front nine en route to a 5-under 67 Friday that gave him a two-shot lead after the second round of the CIMB Classic.

Hurley matched his score from Thursday for a 10-under total of 134, two strokes ahead of American compatriot Kevin Streelman (68) in the jointly sanctioned PGA Tour and Asian Tour event.

A group of seven players was one stroke further back at 7 under, including defending champion Ryan Moore (69).

Hurley, a former U.S. Navy lieutenant who did active duty in the Persian Gulf from 2007-09, is chasing his first tour victory.

“If I can keep hitting it in the fairway and keep putting it like I have and hitting a lot of good putts, then I’ll be right there on Sunday,” Hurley said.

He then had three straight birdies from the 16th to make the turn in 30, but his bogey-free run came to an end on the second when he hit a wayward tee shot into the bushes and wound up with a double-bogey 6. He did not let the errant drive distract him, finishing his round with six pars and a birdie on No. 7. He said the ability to withstand bad moments like that and handle the pressure of being in contention is the main thing he learned from three top-10 finishes last year.

“After the bad swing it could have unraveled there on 2 and 3 but I drew on some of the experience I had from last year and was able to hold it together coming in,” Hurley said. “The cameras, more people watching the last group, couple of groups. It’s the atmosphere of it, and you learn a little bit from that.”

Also in the group of players three strokes back was the field’s top-ranked player, Sergio Garcia (68), and former top-ranked Lee Westwood, who recorded a hole-in-one en route to a 65 that moved him into contention for his second tournament win at this course in seven months.

Others on 7 under included Seung-yeul Noh (69), who like Westwood is a former winner of the Malaysian Open on this course, Kevin Na (68), Jeff Overton (69) and Kevin Chappell (68), who penalized himself a stroke for picking up the ball before marking it on the 16th fairway.

Streelman, who was runner-up in his previous event in Las Vegas this month, credited his improved form to a return to a putter he had put away for years.

“With putters, sometimes you pick it up and it just feels good,” Streelman said. “This is the best my short game has been.”

Westwood, who won the Malaysian Open on this course in April, aced the tough par-3 11th by covering the 226 yards into the wind, landing the ball short and to the right of the hole and watching it curl in.

“You need a bit of luck, but at the same time you have to hit it straight – it happens now and then,” Westwood said. “A 65 has got me right into the tournament.”

Noh is also relishing his return to the KLGCC, where he won the 2010 Malaysian Open at the age of 18.

“I feel very comfortable on this course, and I’m swinging I pretty well, plus I’m putting pretty well too,” Noh said. “I’m really excited for the weekend.”

Moore is seeking to become the first player to defend this title and would have had a share of second if not for a bogey at the last.

“It’s a position golf course. You can’t overpower it with length,” Moore said. “I’m not one of the longer guys, and it makes a lot of guys hit it where I normally hit it, so we play from a lot of the same spots.”

Canada’s Mike Weir carded a 4-under 68 Friday to get to 3-under 141 for the championship. He sits tied for 24th with four others, including opening-round leader Rikard Karlberg and Paul Casey.