Hur pulls away for LPGA Tour win in Alabama 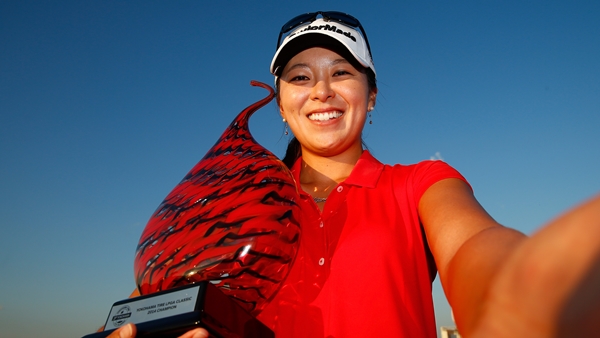 PRATTVILLE, Ala. – Mi Jung Hur was finally able to relax for a couple of holes after matching top-ranked Stacy Lewis stroke for stroke Sunday in the final round of the Yokohama Tire LPGA Classic.

The 24-year-old South Korean player never gave up the last-day lead on her way to a tournament-record 21-under 267 total. Hur birdied four of the final eight holes to beat Lewis by four strokes for her second LPGA Tour victory. The each shot 6-under 66.

Hur was able to savor the end of her round, at least. She made a 36-foot birdie putt on No. 11 and set up much easier birdies after that, including one on No. 16.

“After I made that, I definitely think about winning,” she said. “The last two holes, I really enjoyed the golf.”

She allowed herself to go from relief to tears of joy before her second shot on the final hole as she wrapped up her first victory since 2009. Her father, Kwan Moo, served as her caddie and was able to share the moment as she bowed her head crying for several seconds when the win was official.

“It’s definitely an exciting week for me,” Hur said. “I started with two birdies and it made me so much more comfortable the rest of the round. But Stacy played so well and I definitely thought about her.

“I just played my own game, and after nine holes I made a few birdies on the back nine.”

Hur opened with rounds of 64, 70 and 67 on Capitol Hill’s links-style Senator layout. She broke the tournament mark of 19 under set by Katherine Hull-Kirk in 2010. It was the best 72-hole score of Hur’s career.

She saw on the leaderboard that Lewis had climbed to 16 under with a birdie on No. 10. Hur kept up her own string of birdies with four in six holes starting on No. 11.

“It made me a little nervous, but I just focused on my ball and played my own game,” she said.

Lewis won in 2012 at the tournament that was dropped from the schedule last year after losing its title sponsor. She also closed with a 66.

Rookie Paula Reto was third at 14 under after a 73. She shared the third-round lead with Hur at 15 under.

Kris Tamulis was fourth at 13 under after a 70.

Hur gained two strokes on Reto with a long birdie putt on the first hole while the former Purdue player from South Africa two-putted for bogey. Hur birdied the second hole as well while Reto had a bogey on No. 3.

Reto worked her way back to 16 under before back-to-back bogeys on Nos. 11 and 12 put her four strokes back again.

Lewis, a three-time winner this year, opened with four birdies in a six-hole stretch starting on No. 3. She finished her bogey-free round with five straight pars, not enough to close the gap on Hur.

Lewis said it was one of her best days striking the ball “in a long time.” She said the 18th hole was the only time on the back nine where she didn’t have a potential birdie putt of 15 feet or less.

“You get events where people kind of run away with tournaments,” Lewis said. “I’ve done it before. It’s just golf. I played well, gave myself a ton of opportunities for birdies, which that was the goal coming into the day.

“I would have liked to have made a couple of more to give her something to think about coming up those last few.”

Canada’s Alena Sharp climbed 20 spots up the leaderboard Sunday after a final round 6-under par 66. The Hamilton, Ont. native tied for 30th at 5-under 283.